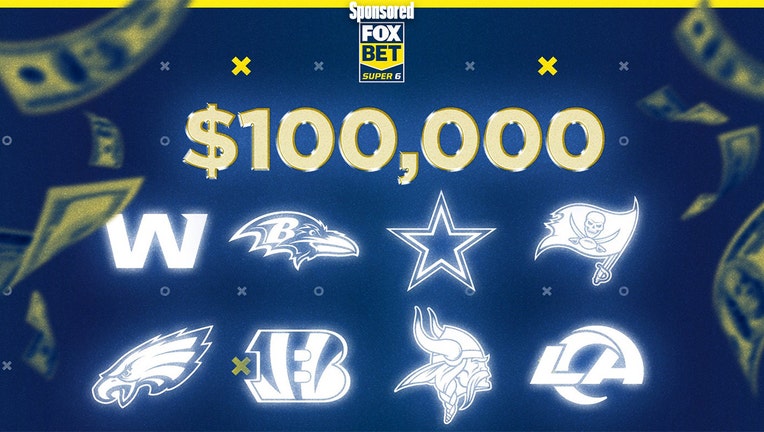 What a time to be a football fan. It's Week 16 of the NFL season, for starters, with plenty of electrifying matchups on the docket. It's also a holiday week, where many of us are taking time off from work or school … to watch more football. Oh, and the football docket now includes Saturday games, featuring a Christmas Day matchup this year that has even more meaning — but we'll get to that in a second.

Even better? This week, FOX Bet is giving away $100,000 of Terry Bradshaw's money absolutely for free. All you have to do is download the FOX Bet Super 6 app, enter the NFL Sunday Challenge and make your picks on six games from Sunday's Week 16 slate. If you're right, you'll have a shot at the grand prize!

Oh, and don't forget — this week, you could win a house absolutely for free thanks to FOX Bet Super 6! All you have to do is make your picks for the separate Christmas Day NFL contest, then make sure to enter the sweepstakes at the very end. Regardless of whether there's a Super 6 jackpot winner, one lucky fan will come away with the home!

The narrative is the Vikings are the "best worst team in the NFC," but the reality is they’re a poorly coached team that struggles to execute.

Dalvin Cook is an elite running back, Justin Jefferson is already one of the best receivers in the league, and the advanced stats love Kirk Cousins, who grades out above Matt Stafford so far this season. But then you have to take Mike Zimmer into account. He often coaches down to his opponent (see both games against Detroit, and Minnesota needed overtime versus Carolina), but he also has wins over Russell Wilson, Justin Herbert and Aaron Rodgers, with two of those coming at home.

And it’s a tough spot for the Rams, having to travel halfway across the country after playing on Tuesday to face a team fighting for its playoff life. Stafford will eviscerate this putrid Vikings secondary, and I can’t wait to see Jalen Ramsey versus Jefferson.

One note: The Vikings are 2-1 against the NFC West and came close to toppling the 49ers but failed twice in SF territory in the fourth quarter on downs.

Are Tom Brady’s Bucs facing the New Orleans Saints defense? No? Then it’s safe to take Tampa to win this one.

Carolina offensively is a nightmare right now, but perhaps Sam Darnold is back under center from the IR to put Panthers fans out of the misery that has been the Cam Newton experience. Since taking over as a starter, Newton is 0-4 with 3 TDs and 4 INTs, and he has yet to eclipse 200 yards passing in any of those games, despite trailing in the fourth quarter in each. In fact, Newton has lost 13 straight games as a starter for the Panthers.

Last year, Tom Brady faced Carolina after both of the regular season losses to the Saints; he threw four TDs and just one interception, and Tampa Bay won each by 14-plus. The Bucs did, however, come out of the New Orleans loss Sunday night with some significant injuries: Chris Godwin is out for the season with a torn ACL, and Leonard Fournette and Mike Evans also left with injuries. It’s unclear yet if Evans will play, while Fournette’s injury is expected to sideline him a couple weeks. Antonio Brown is expected back from IR/suspension.

Carolina’s Matt Rhule wants to run the ball more, which is why he fired his OC, Joe Brady; the Panthers ran 29 times for 151 yards against the Bills. Good luck trying that against a Top 5 run defense that gave up 61 yards on 33 carries (!) against the Saints.

Pick: Buccaneers to win by 7-9 points

The Giants are playing out the string, a rudderless franchise that has been adrift for a decade, with no leader and no culture. The coach and the GM almost certainly will be gone after the season is over, and it’s unclear what the future holds at QB or even running back, where Saquon Barkley continues to struggle. Sure, he’ll deliver an occasional splash play, but he’s still dancing too much, trying to find holes that don’t exist. Barkley’s last two games: 31 carries, 114 yards, or 3.6 yards per carry. He hasn’t had one carry over 20 yards in those two games. In fact, he’s had three explosive carries all season. Not what you’d expect from a No. 2 overall pick.

The Eagles, firmly in the playoff mix, are a run-first team that ran well in the teams' first meeting (208 yards). In that Giants 13-7 win, Philadelphia had more first downs, yards, and more yards per play, but lost the turnover battle 4-0, with Hurts throwing three interceptions. Injuries might be a factor on the extremely short week for the Eagles, but this is a terrific revenge spot.

A month ago, NFL observers wondered if the Lions would be the first 0-17 team; now they have two wins and no longer are in position to get the first pick in the 2022 NFL Draft. But the Lions have saved their best for gamblers — they’re 9-5 against the spread, tied with the Patriots, Cardinals and Colts for second-best in the NFL. Can Detroit continue this run without their best two offensive weapons, TJ Hockenson and D’Andre Swift?

It’s not like Atlanta is an offensive machine; the only team it beat with a winning record at the time of the game was New Orleans, in a rivalry game. The Falcons are a frustrating team to back, as evidenced by their 1-of-5 effort in the red zone versus San Francisco last week in a game they could have covered the spread. How do you get inside the 10-yard line three times and come away with zero points?

The Lions will run practice squad hero Craig Reynolds, then run him some more, and work in some play action to receivers who didn’t get drafted in your fantasy league. They even tossed in a wrinkle versus Arizona — throwing deep. Jared Goff had two deep TD passes total in Weeks 1-14; he had two deep TD passes last week versus the Cardinals.

Weather won’t be a factor in the dome (Jared Goff is 4-3 ATS in domes), but the Falcons can’t get separation anyway, as all six wins have come by one score.

Pick: Falcons to win by 5-6 points

The earlier Bengals/Ravens meeting was one of the season’s biggest surprises, with the underdog Bengals going into Baltimore and hanging a 41-17 beatdown on the Ravens. Not only did they sack Lamar Jackson five times, but the offense put up 520 yards and 8.3 yards per pass attempt. That was with Marlon Humphrey in the secondary; he got lit up by rookie Ja’Marr Chase (201 yards) and now the Ravens' top cornerback is out for the season. Somehow, Cincinnati scored 41 points and went 0-for-2 in the red zone!

Baltimore will be out for revenge, obviously, but are they healthy enough to pull this off? The Ravens' ship has been sinking for three weeks, and John Harbaugh is coaching desperate, going for two-point conversions in the final seconds (and failing) twice. Lamar Jackson is expected back this week, although Tyler Huntley played well enough to provide optimism should the former MVP be unable to go. From the offensive line to the running backs to the secondary, Harbaugh deserves a gold medal for having this team in playoff contention. Just remember, the Bengals as favorites are just 3-4 ATS; the Ravens are 4-0 as underdogs.

Pick: Bengals to win by 1-2 points

This is a brutal spot for Washington, which got smacked by the Cowboys two weeks ago — they trailed 27-0 in the 3rd quarter before a garbage time rally — then had the game with Philly pushed to Tuesday. Now they have to travel to Dallas again. The Cowboys are 8-2 as favorites this year, and have the best ATS record overall, 12-2.

The Cowboys' offense isn’t broken, but it has certainly struggled in recent weeks as the defense has carried them to three straight wins by forcing 12 turnovers. Of course, the QBs faced were Taysom Hill, Taylor Heinicke and Mike Glennon, but it’s not like they’re facing Joe Montana this week.

Some of Dak’s struggles can probably be attributed to coach Mike McCarthy, who might be nudging OC Kellen Moore toward a conservative game plan. Why risk mistakes when this defense is suddenly impenetrable? This just isn’t the same team we saw throw 58 times versus Tampa in the season opener, going up and down the field, or even the same unit that went for 41 points versus Philly, 44 versus the Giants, and 35 versus the Patriots earlier in the season. To go from an explosive offense to zero plays of 20-plus yards versus the Giants last week is alarming, but it could be by design. Are the Cowboys saving the aggressive offense for the playoffs?

Buccaneers to win by 7-9 points

Eagles to win by 7-9 points

Falcons to win by 5-6 points

Bengals to win by 1-2 points