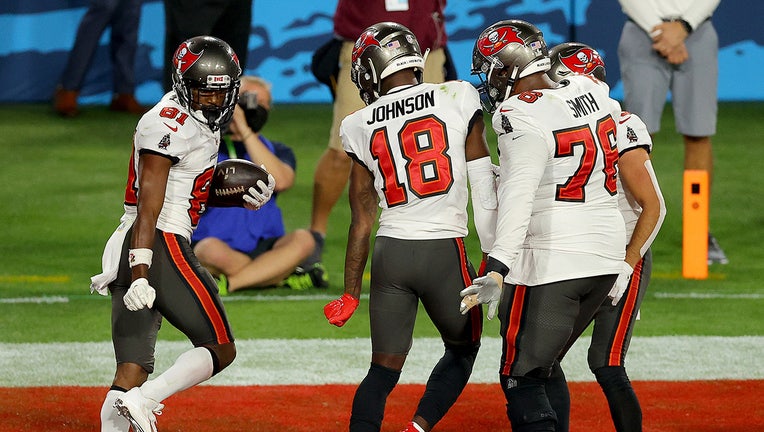 TAMPA, Fla. - It's not one of the longest receptions in Antonio Brown's career, but it's one of the most memorable ones. A 10-yard, first down catch in the first-quarter catch was Brown's 900th. He's reached that milestone faster than anyone in NFL history.

Brown did it in his 143rd career game, six games faster than Marvin Harrison, who spent 13 seasons in the NFL with the Indianapolis Colts. It was a proud moment in Brown's 11-year career.

"That's something I'm really grateful for, but I couldn't have done by myself, Brown said. "Being able to play with some great quarterbacks, Ben Roethlisberger, Tom Brady, it’s a blessing to play with guys like that."

"Pretty amazing," Tom Brady said. "I give him a lot of credit. He's been through a lot, showed a lot of mental toughness, a lot of resilience. A lot of support from a lot of different people in his life at different times. Everyone just really wants him to succeed."

Brown's next reception shows that he isn't slowing down at the age of 33. A.B. splits three defenders and pulls away for a 62-yard touchdown. The first of two scores on the day. It's also the longest reception since Brady and Brown put on Buccaneer jerseys. The two have developed strong chemistry and admiration for one another.

"So much inspiration from Tom. Constant pro, constantly professional, constant leader. Not only making sure that he is doing his job but making sure all other 10 guys are doing their job too. He never ceases to amaze me, man. He just continues to up the standard and raise the bar. I am grateful to be on his team."

"Since the day we've met, I’ve watched and admired him for a long time," said Brady. "Obviously played with him briefly in New England, and just struck up a great relationship. Really wanted to see him get things -- sometimes things can take us away from what we really love to do in football and play. I think he's done an incredible job personally of putting a lot of those things aside, and just focusing on football and showing people how great he is."

Brown went over 100 yards in a game for the 50th time in his career, moving him into a tie for eighth most in NFL history. Just over a year ago, many doubted he'd play another down in the NFL due to his off-the-field issues. Bruce Arians told him at the time of his signing with the Bucs he had one shot and Brown has been making the most of it.

"There were no second chances," Arians said. "He's grasped this opportunity and ran with it. I'm really, really proud of him. I think he's just matured so much in his everyday habits. He's been doing everything I've asked of him. I would not expect anything else."

"We all need to go through things to shape our purpose and make us better," Brown said. "If we all just sit here and didn't never go through anything, we wouldn't be able to appreciate life or we wouldn't never be able to grow. The things I went through, was able to prepare me to grow and make me a better person."