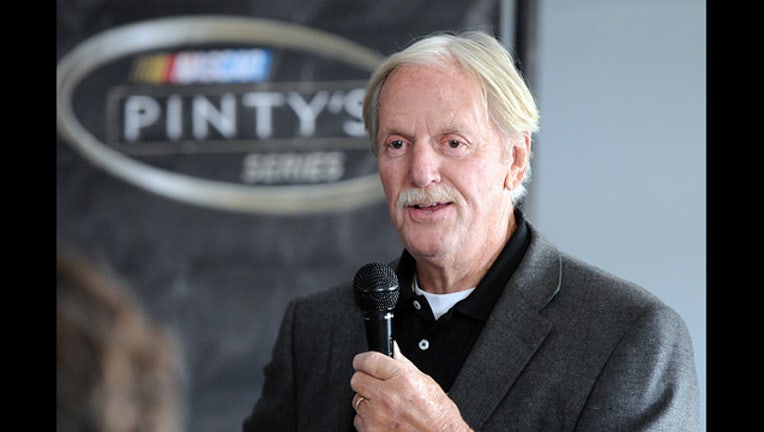 Robert Yates addresses the driver and crew chief meeting before the start of the NASCAR Pinty's Series Clarington 200 race at Canadian Tire Mosport Park on May 22, 2016 in Bowmanville, Canada. (Photo by Matthew Manor/NASCAR via Getty)

His son Doug Yates, who today runs Robert Yates Engines, posted the news on Twitter, calling his dad his "hero."

Roush Yates also posted to its social media accounts that Yates died "surrounded by his family and loved ones."

No cause of death was given, but Yates had been battling liver cancer.

Yates started out in auto racing as an engine builder. He won 57 Cup races as an owner, including three Daytona 500s with drivers such as Davey Allison and Dale Jarrett.

NASCAR Hall of Fame statement on passing of Robert Yates:

"First and foremost, on behalf of everyone at the NASCAR Hall of Fame, we send our sincere condolences to Carolyn, Doug, Amy and the entire Yates family. Robert Yates was enormously successful as a winning and championship engine builder and car owner in his professional life in NASCAR, earning him a well-deserved selection as a NASCAR Hall of Fame inductee in the Class of 2018. It was such a pleasure to experience the joy Robert, Carolyn and the entire Yates family felt upon his selection to the Hall of Fame this past May. He will forever be remembered for the incredible horsepower his powerful engines produced that were always feared by his competitors; for the championships with Hall of Famers David Pearson (1968, 1969), Bobby Allison (1983) and Dale Jarrett (1999) and numerous wins with a host of drivers including other fellow Hall of Famers Fireball Roberts, Fred Lorenzen and Richard Petty and nominees Davey Allison and Ricky Rudd to name a few. But he will be remembered even more as a winning and championship caliber person. He was among the most respected and beloved members of the NASCAR community—gracious, humble, genuine and a true gentleman. He will be dearly missed, but his impact and legacy on NASCAR and the many fortunate enough to know him will live with us forever. Again, we offer our sincere condolences to the entire Yates family."

More on this story at FoxNews.com