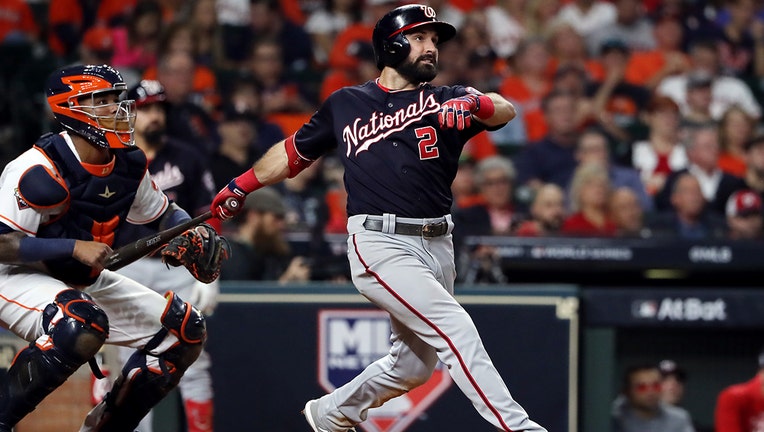 HOUSTON, TEXAS - OCTOBER 23: Adam Eaton #2 of the Washington Nationals hits his two-run home run against the Houston Astros during the eighth inning in Game Two of the 2019 World Series at Minute Maid Park on October 23, 2019 in Houston, Texas. (Phot

HOUSTON (AP) - Stephen Strasburg's time had come. Famously held out of the postseason seven years ago, Strasburg delivered on the biggest stage of all Wednesday night.

The right-hander outdueled fellow ace Justin Verlander, overcoming a shaky start to give the Washington Nationals a 12-3 win over the Houston Astros and a commanding 2-0 lead in the World Series.

Kurt Suzuki hit a tiebreaking homer in what became a messy six-run seventh inning, and the Nationals headed back home to Washington for three games -- if needed.

Adam Eaton paraded around the bases pointing to the Houston crowd after a late home run as the Nationals won their eighth in a row. They've won 18 of 20 overall dating back to the regular season, with the last two over AL Cy Young Award favorites Gerrit Cole and Verlander.

Game 3 is Friday night when Anibal Sanchez opposes Houston's Zack Greinke in the first World Series game in the nation's capital since 1933.

The 31-year-old Strasburg had waited years for this chance. Back in 2012, he was about two years removed from Tommy John surgery when Nationals brass decided protecting his elbow was more important than pitching him in the playoffs, so he was shut down late in a season full of promise.

Making his Series debut, Strasburg allowed a two-run homer to Alex Bregman in the first before throwing five shutout innings to improve 4-0 this postseason. He allowed seven hits and struck out seven.

Verlander, so good in the regular season, fell to 0-5 in six World Series starts. He gave up seven hits and four runs, and was lifted after walking a batter following Suzuki's home run.

Verlander led the majors with 21 wins this season and struck out a career-high 300 to reach 3,000 in his career. He has a World Series ring, MVP and Cy Award trophies, and three no-hitters on his resume.

He struck out six to become the career leader in postseason Ks with 202 -- another impressive statistic on a stellar resume that is still missing that elusive World Series win.

Their dominance against Houston's best pitchers turned the underdog Nationals into heavy favorites to win the title. Only three of the previous 25 teams to lose the first two games at home under the 2-3-2 format have come back to win the Series. No one has done it since the 1996 New York Yankees.