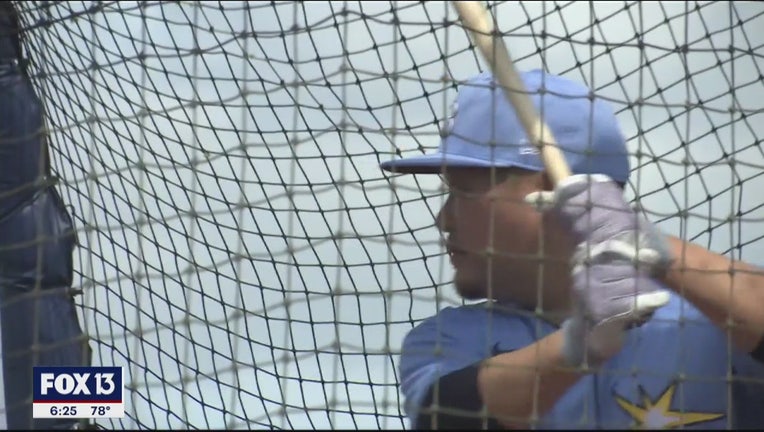 PORT CHARLOTTE, Fla. - Day one of the Rays out in full force featured several new offseason acquisitions including, but not limited to outfielders Hunter Renfroe, and Manuel Margot.

“Seeing all the new guys we have, we're really excited to get going,” Rays outfielder Austin Meadows said before Monday’s workout. “These guys are athletes. They can hit the ball, they can throw the ball so we’re excited to see the full squad out there.”

Of course, the main attraction - as indicated by numerous Japanese media outlets in attendance - came all the way from Japan: Yoshimoto Tsutsugo.

“I’m very thankful that fans from all over the place have shown up today to watch me practice,” Tsutsugo said through a translator.

Known for putting on a show with his bat, Tsutsugo did just that for fans and media during batting practice.

“It felt good hitting it at the end,” added Tsutsugo, who has hit 209 home runs in the Japan Central League over the last seven years. “[It was] more exciting than nervous. Honestly, I wasn’t that nervous.”

While Tsutsugo is arguably the marquee addition of the offseason, he’s one of several who the Rays believe can help improve an offense that still lost Tommy Pham, Avisail Garcia, and Travis d’Arnaud.

“[Manuel] Margot, he’s pretty good on defense,” Willy Adames told FOX 13 Sports. “[Jose] Martinez is going to help out a lot on offense, and I think we’re going to do a pretty good job this year, and I think the offense is looking good.”