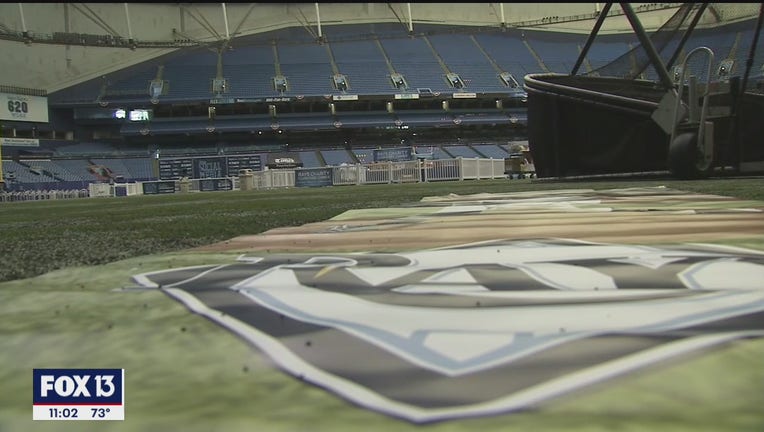 ST. PETERSBURG, Fla. - A new season is about to begin for baseball teams and fans, and that includes in-person attendance in Tropicana Field. Tickets for the Tampa Bay Rays go on sale Friday morning.

The regular-season ticket sale comes just two weeks before baseball returns to the Trop. The rays are scheduled to start their season and defend their American League pennant title against the New York Yankees – and fans can be there to see it.

Individual game tickets go on sale at 10 a.m. on RaysBaseball.com and on the MLB Ballpark app. However, there will be a fairly limited number of tickets. That’s because they’re limiting capacity to 9,000 to start the season, which means tickets will likely be sold out quickly. Capacity limits could change for future games as the season progresses and more people receive the COVID-19 vaccine.

Fans are required to wear a face-covering at all times, except while actively eating or drinking in their seats.

The tickets released this morning are for the first month of the season: 15 home games that include head-to-head games with the Yankees, Rangers, Blue Jays, A’s, and Astros

Tickets will be sold in pods of up to 6 to ensure social distancing. Previously tarped seating areas – specifically the 300-level seats 0-- will be uncovered to give everyone even more space. Masks will be required for anyone over the age of 2.

The defending AL champions flirted with winning the World Series during the pandemic-shortened 2020 season and are motivated not only to get back to baseball’s biggest stage but win it all after losing to the Los Angeles Dodgers in six games.

The Rays said they’ve also made several safety updates around the Trop as well. They’ve installed UV lights and specially-designed electronic devices inside air conditioning units that break down a wide variety of harmful contaminants, including coronavirus.

New air filters have also been added throughout the building. The team said it’ll release more information on tickets for future games once the season is underway but they’re hoping to be able to steadily increase capacity as the season moves forward.

On Saturday, the team will host their annual Fan Fest, but it will work differently this year because of the pandemic. It’s now a drive-thru event called "Drive to Opening Day."

Fans can drive around Tropicana Field, take part in dozens of activities, and get free prizes. They can even take a photo with the American League Championship trophy.

The event is free, but if fans haven’t reserved a spot by now, they are out of luck. It’s all booked up.