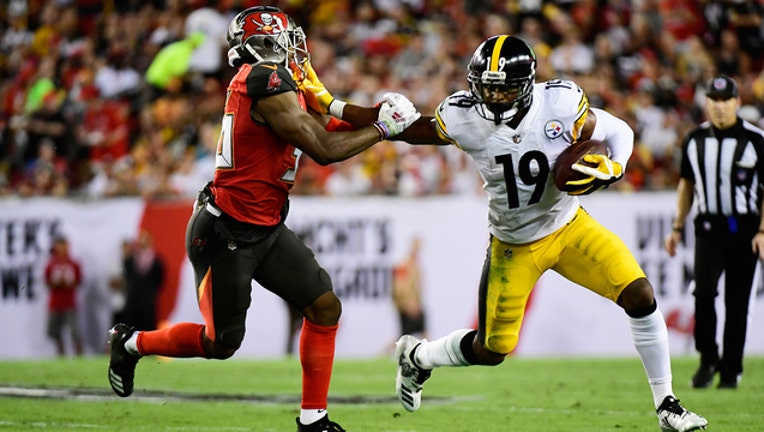 TAMPA, Fla. (AP) - It was not the way Ben Roethlisberger would draw it up, but the Pittsburgh Steelers will take it.

In desperate need of a win, the two-time defending AFC North champions capped a tumultuous week in which star receiver Antonio Brown made headlines by shouting at an assistant coach on the sidelines and getting into a spat on social media with a 30-27 victory over the Tampa Bay Buccaneers on Monday night.

The Steelers (1-1-1) built a 20-point lead held on for their first win despite not scoring after halftime.

"I don't feel like we had the ball much in the second half. Three possessions maybe. We need to do a better job putting it away," Roethlisberger said.

"At the end of the day we just wanted to get out of here with a win," cornerback Joe Haden added. "It wasn't a good-looking win at all. They made a lot of plays on us, but at the end we made some big stops."

Roethlisberger threw for 353 yards and three touchdowns, with all but 80 yards of that production coming while the Steelers were building a 30-10 halftime lead.

Vance McDonald scored on a 75-yard pass play and finished with four catches for 112 yards. Brown and Ryan Switzer also had first-half TD receptions for Pittsburgh, which had been winless through two games for the first time since 2013.

The Pittsburgh defense did its part, too, forcing four turnovers, including three first-half interceptions of Ryan Fitzpatrick, the 35-year-old journeyman who threw for 819 yards and eight touchdowns in two victories to begin Tampa Bay's season.

Fitzpatrick, the only player in NFL history to open a season with consecutive games with over 400 yards passing and four touchdowns, tried his best to create "FitzMagic" again in his third start in place of the suspended Jameis Winston.

He led a long field goal drive in the third quarter, and then tossed fourth-quarter TD passes of 4 yards to Chris Godwin and 24 yards to Mike Evans to rally the Bucs (2-1) within 30-27 with 5:43 remaining.

"We obviously dug ourselves a pretty big hole," Fitzpatrick said. "The great thing to me coming out of this game is again the belief in the huddle in the second half and guys not wavering and not blinking and having the feeling the whole time that we were going to come back and win the game."

The Bucs got the ball back with just over three minutes left; however, the Steelers forced a punt and Roethlisberger ran out the clock.

Fitzpatrick, who sacked three times, finished 30 of 50 for 411 yards and three TDs.

"We just did so many things in the first half of that game that we haven't been doing, so many things to beat ourselves," Bucs coach Dirk Koetter said.

"I'm really proud of the way we fought. You're down three touchdowns or three scores at halftime, it's not easy to come back in this league," Koetter added. "We gave ourselves a chance there at the end and just couldn't pull it off."

Roethlisberger was 30 of 38 with one interception, completing nine passes to JuJu Smith-Schuster for 116 yards and six to Brown for 50 yards.

The quarterback's on-field chemistry with Brown appeared fine in the first game since Brown responded to a former team employee on social media by suggesting the club trade him if it wants to find out how productive he can be without Roethlisberger.

Fitzpatrick threw interceptions on three consecutive pass attempts during one stretch of the second quarter. The first stopped a promising drive at the Steelers' 6, and linebacker Bud Dupree returned the last one 10 yards for a touchdown that put the Steelers up 23-7.

Roethlisberger also turned a fumble into a 27-yard TD pass to Brown and moved the Steelers 75 yards in nine plays just before the half to make it 30-10 on his 1-yard scoring pass to Switzer.

The teams combined for five roughing-the-passer penalties, most in an NFL game since 2001, as fans around the league continue to gripe about flags being thrown for what appear to be routine tackles. Pittsburgh was flagged three times for hits on Fitzpatrick, and the Bucs were called twice for roughing Roethlisberger. In all, the Steelers were penalized 13 times for 155 yards. Tampa Bay had nine penalties for 80 yards. The Bucs also had a holding penalty that wiped out what would have been an 80-yard punt return for a TD by DeSean Jackson.

Hall of Fame coach Tony Dungy, who won a Super Bowl ring as player with the Steelers and as a first-time head coach transformed Tampa Bay from a laughingstock into a championship contender, was inducted into the Bucs Ring of Honor at halftime.

Dungy and his wife, Lauren, accompanied Tampa Bay's captains to midfield for the coin toss. Three of the couple's children - Jade, Justin and Jason - led the team out of the tunnel as the honorary flag runners.

Buccaneers: Defensive tackle Beau Allen (foot) was inactive after being injured during Tampa Bay's Week 2 victory over Philadelphia. S Chris Conte left in the second quarter with a knee injury and did not return.

Buccaneers: Visit Chicago on Sunday in the first game Winston is eligible to play.