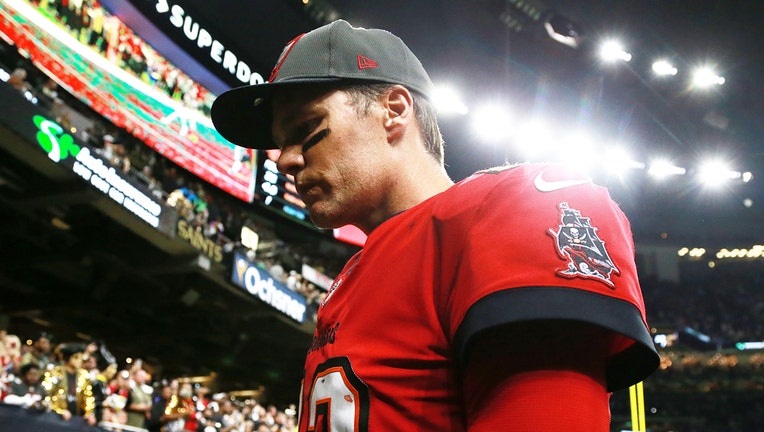 NEW ORLEANS, LOUISIANA - OCTOBER 31: Tom Brady #12 of the Tampa Bay Buccaneers walks off the field after being defeated by the New Orleans Saints 36-27 at Caesars Superdome on October 31, 2021 in New Orleans, Louisiana. (Photo by Sean Gardner/Getty I

NEW ORLEANS, La. - When Saints quarterback Jameis Winston could no longer walk on his own, his New Orleans teammates rose up in a dramatic fashion to knock off Tom Brady and the defending champs.

P.J. Williams intercepted Brady and returned it 40 yards for a touchdown with 1:24 left, helping New Orleans seal an eventful but potentially costly 36-27 victory over the Tampa Bay Buccaneers on Sunday.

Winston injured his left knee during a scramble early in the second quarter when pulled down from behind by former LSU star Devin White, who was flagged for a horse-collar tackle.

"I think it’s significant," said coach Sean Payton, adding that he cried when he saw Winston in the locker room. "He felt something and is on crutches right now. ... When he got up and then had to go back down, you were a little concerned."

Backup Trevor Siemian took over for Winston and completed 16 of 29 passes for 159 yards and a touchdown without a turnover, leading the Saints on five scoring drives that produced two touchdowns and three field goals.

Payton said he had confidence in Siemian, who’d started for Denver in 2016 and 2017. Payton added his play calling for the duration of the game had more to do with how Tampa Bay was defending than the fact that his backup QB was under center.

Siemian, who last took a meaningful snap in Week 2 of the 2019 season with the New York Jets, said he’d "kind of lost a little bit a sense of how fun it is."

"There’s a joy to this game," Siemian said. "There’s nothing better than to see your teammates make plays and you’re moving the ball and it’s the best."

Winston’s first start against the team that drafted him first overall in 2015, and then let him go in 2020 when they had a chance to sign Brady, was a subplot of this NFC South clash.

And Winston looked determined to do whatever it took to win, passing for 56 yards and a 14-yard touchdown to Tre’Quan Smith, and scrambling for 40 yards before his injury. Payton gave Winston a game ball, and teammates lamented his injury.

"It was hard, man, because he worked so hard this offseason," said Williams, Winston’s friend since they were teammates at Florida State. "It’s tough for me, it’s tough for the team and I know it’s tough for him. I told him at halftime we were going to go out there and win for him."

Brady passed for four TDs, but also turned the ball over three times on a pair of interceptions and a fumble, which the Saints converted into 16 points.

The Bucs nearly overcame their mistakes. They wiped out a 16-point second-half deficit and took a lead with 5:44 to go when the receiver and former LSU track athlete Cyril Grayson was left uncovered and Brady found him for a 50-yard touchdown.

New Orleans responded by driving for a field goal and a 29-27 lead with 1:41 left, leaving Brady, no stranger to late-game heroics, that much time plus a timeout to get in field goal range. Instead, the Saints’ defense came up big.

"I just threw it to the wrong guy," Brady said of his late interception. "I had Mike (Evans) open. It cost us the game."

New Orleans’ defense came up with two turnovers in the second quarter after Winston was carted to the locker room, and the Saints’ offense converted those into nine points.

The Saints got a field goal, but only after a roughing-the-passer call against William Gholston wiped out what would have been an interception by Antoine Winfield Jr. in the end zone.

Later, Brady was intercepted by C.J. Gardner Johnson, who had left his man to undercut a pass intended for Chris Godwin.

The Saints widened their lead to 23-7 on the opening possession of the second half, which began with Siemian hitting Kevin White for a 38-yard gain. Alvin Kamara finished it on a pitch play on fourth-and-goal from the 1.

But Brady responded by leading the Bucs to touchdowns on two straight possessions. He hit running back Giovani Bernard for a 7-yard TD and launched a 41-yard scoring strike to Evans, who beat Marshon Lattimore in single coverage.

For the Bucs, the loss squandered a prolific day for Godwin, who had eight catches for 144 yards, including a 12-yard touchdown in the first quarter.

The Saints rushed for 152 yards — led by Kamara’s 61 — against Tampa Bay’s top-ranked run defense, which came in allowing 67.4 yards rushing per game.

The Saints sacked Brady three times: one each by Jordan, Kwon Alexander and Tanoh Kpassagnon.

Buccaneers: Tight end Rob Gronkowski, who’d missed the Bucs’ previous four games with ailing ribs, played only briefly before being ruled out with back spasms.

Buccaneers: Enter their bye week before visiting Washington on Nov. 14.