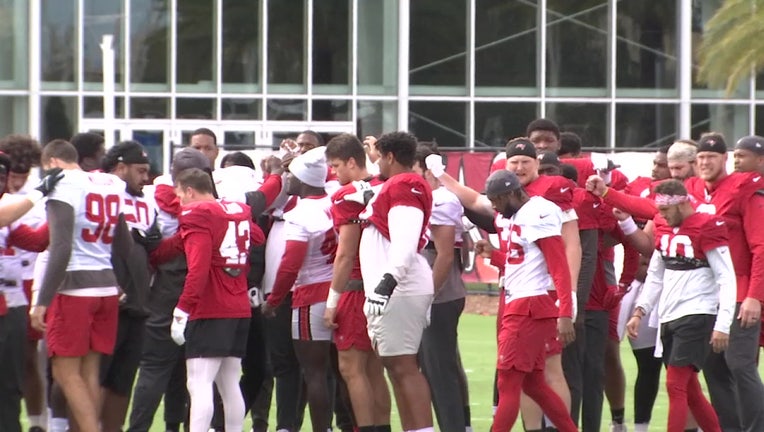 TAMPA, Fla. - The Tampa Bay Buccaneers are six weeks into the season, and their offense is broken. An offense that was the envy of the NFL for the last two years has crumbled for numerous reasons.

The struggles started with a new interior offensive line that isn't opening holes or protecting Tom Brady. In 2021, the Bucs led the league in explosive big plays. Game changing plays that are virtually nonexistent this season.

READ: Brady compares football season to 'going away on deployment in the military'

With Tom Brady still at the helm, and his two top targets Mike Evans and Chris Godwin to throw to, what is the key ingredient that's missing from the Bucs offense?

While the Bucs try to figure out how to fix their offense from being stagnant, one of the new guys to the wide receiver group sees a couple elements missing: Fun and energy.

"I think there’s a lot of times when we’re kind of dead, even when we’re making good plays," said wide receiver Russell Gage. "Energy and having fun. This game is supposed to be fun. I love this game, and I know everyone here loves this game. Sometimes we just get caught up doing our job that we're not really having that fun and bringing that energy."

In three seasons as the Bucs head coach, Bruce Arians offense's have ranked no worse than seventh in yardage. Right now, the Bucs are 21st, so should Arians be consulted to aid in jump-starting this team?

"Well, this is my team, not Bruce’s team, but we talk all the time," said Bowles. "You don’t jump-start by asking a former coach what to do. We have our own things to deal with, and we understand that. We’ve been with Bruce long enough to know what he wants, but they’ve been with me to know what I want. We’re working towards that, and we’ll get through it."