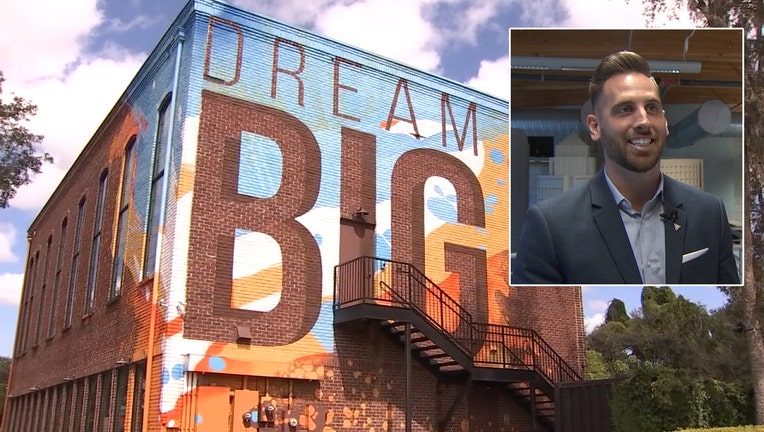 TAMPA, Fla. (FOX 13) - Cold brew on tap, Kombucha and conversation and an impromptu basketball game. No, this isn't a cool new coffee show; this is the home of Diamond View Studios.

"I think that your office is your art piece," explained Tim Moore, who owns the office space. "It can be your playground. It can be whatever you make it."

It's a business model that's proven successful for Tim and his video production company. Not only did the Tampa Bay Business Journal name Diamond View Studios the coolest office space in 2016, they've also scored big name clients like Gatorade, Purina and the Atlanta Braves. His company also does work for his alma matter: the University of South Florida.

"I've always been in love with Tampa Bay -- not only the climate, but also the people here are nice and engaging," he explained. "When I started my business 12 years ago, there was no question in my mind I was going to stay here."

Tim is doing more than planting roots in the Bay Area, he's spreading seeds of inspiration through his non-profit organization, the Tampa Foundation. The mission is to cover the city with inspiring billboards and artwork. Like the "dream big" mural that wraps around the Diamond View building on Bearss Avenue in Tampa.

If you look, you might notice the mural at Mort Elementary that reads, "You Are the Future." Tim hopes the message will remind students that while they are the kids of today, they are also the future of tomorrow.

"I hope one day every street you drive down has murals that inspire people. Whether it's the halls of schools or the walls at intersections or even the water towers surrounding the city. I see it as an opportunity to put art everywhere," said Tim.

Opportunities that Tim says would not be possible without generous donors like Par Inc. They're behind the Tampa Foundation's latest and tallest creation.

"They just sponsored a new water tower that says ‘Be Kind, Do Good'. It's a message they've been saying for years, but now we're able to say that to the community," said Tim.

Tim expects the mural to be finished next week. If you look up, you'll be able to see it on Interstate 275 and Howard Avenue. It's just one of the powerful messages being spread with a little paint and positivity.