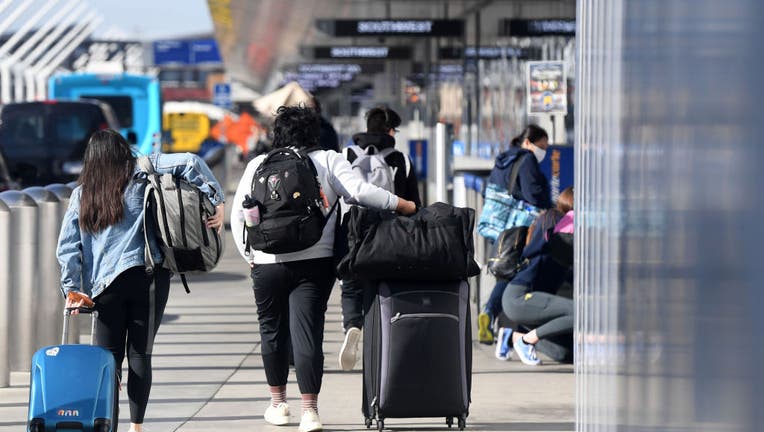 The auto club predicts 54.6 million people will travel 50 miles or more from home this Thanksgiving.

That number is a 1.5% increase over 2021 and 98% of pre-pandemic volumes. This year is expected to be the third busiest holiday travel since AAA started tracking the numbers in 2000.

What should I expect for air travel this holiday season?

During the summer, there were countless delays and cancelations on flights across the U.S. FOX 5 New York's Lissette Nunez spoke with LiveNOW from FOX's Josh Breslow about what to expect this holiday travel season.

"Families and friends are eager to spend time together this Thanksgiving, one of the busiest for travel in the past two decades," Paula Twidale, AAA’s senior vice president of travel, said in a news release. "Plan ahead and pack your patience, whether you’re driving or flying."

With regards to roads, AAA believes most travelers will drive to their destinations, estimating nearly 49 million people will choose this option.

The agency believes 4.5 million Americans will fly to their Thanksgiving destinations this year. That’s an increase of more than 330,000 travelers and nearly 99% of the 2019 volume.

Travelers will have to contend with inflation

Regardless of the mode of transportation, Americans will have to contend with higher prices due to inflation. U.S. consumers are facing the highest inflation in 40 years, and there is growing concern about a potential recession. That isn’t showing up in travel numbers, however.

AAA says the current national average price for a gallon of regular gas is $3.76. That’s up from $3.42 a year ago.

Airline executives say that based on bookings, they expect huge demand for flights over Thanksgiving, Christmas and New Year’s. Travel experts say the best deals for airfares and hotels are already gone.

Luxury bus travel is 'not just a trend,' operators say

With the headaches of pandemic-era airline travel, luxury bus lines bill themselves as a cheaper and more convenient alternative.

On social media, plenty of travelers think they are being gouged. It’s an understandable sentiment when government data shows that airfares in October were up 43% from a year earlier, and U.S. airlines reported a combined profit of more than $2.4 billion in the third quarter.

Hotels are struggling with labor shortages, another cause of higher prices. Glenn Fogel, CEO of Booking Holdings, which owns travel-search sites including Priceline and Kayak, says one hotelier told him he can’t fill all his rooms because he doesn’t have enough staff.

Rates for car rentals aren’t as crazy as they were during much of 2021, when some popular locations ran out of vehicles. Still, the availability of vehicles is tight because the cost of new cars has prevented rental companies from fully rebuilding fleets that they culled early in the pandemic.

Tips for saving money on travel

Travel experts offer tips for saving money and avoiding getting stranded by a canceled flight, although the advice hasn’t changed much from previous years.

RELATED: Fly now, pay later: Here’s how you can book a flight but pay for it next year

Be flexible about dates and even destinations, although that’s not possible when visiting grandma’s house. In a recent search, the cheapest flights from Los Angeles to New York around Christmas were on Christmas Eve and returning New Year’s Eve.

Look into discount airlines and alternate airports, but know that smaller airlines have fewer options for rebooking passengers after a flight is canceled.

Fly early in the day to lower your risk of a delay or cancellation. "If something goes wrong, it tends to progress throughout the day — it gets to be a domino effect," said Chuck Thackston, general manager of Airlines Reporting Corp., an intermediary between airlines and travel agents.

There are plenty of theories on the best day of the week to book travel. Thackston says it’s Sunday because airlines know that’s when many price-conscious consumers are shopping, and carriers tailor offerings for them.