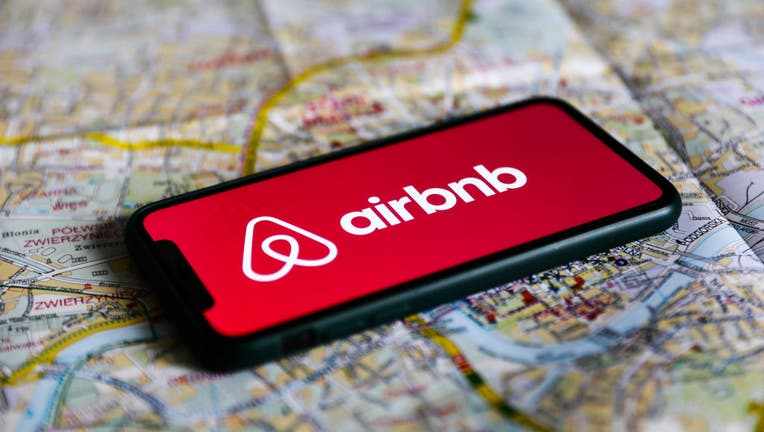 Airbnb logo displayed on a phone screen and a map of Krakow are seen in this illustration photo taken in Krakow, Poland on August 17, 2021. (Photo by Jakub Porzycki/NurPhoto via Getty Images)

Airbnb is permanently banning all parties and events at its rental properties around the world.

The San Francisco-based home-share company announced Tuesday that it was codifying the temporary ban placed on unauthorized house parties over two years ago after it was proven to be effective.

The company believes there is a "direct correlation" between the implementation of the policy in August 2020 and a 44% year-over-year drop in the rate of party reports.

The company first implemented the ban, which had been in effect until further notice, after guests started to partake in "partying behavior" at rented homes while bars and clubs were shut down or had restricted occupancy due to the pandemic.

These parties were not only disruptive but also ran the "risk of such gatherings spreading the virus," Airbnb said in its Tuesday announcement.

Aside from the ban, Airbnb had also capped all occupancies at 16. This rule was put in effect to help prevent the spread of the virus through large gatherings, Airbnb said.

AIRBNB CEO PREDICTS GUESTS WILL STAY 'WEEKS, MONTHS, OR EVEN ENTIRE SEASONS AT A TIME'

However, as part of the updated policy, the company is removing its 16-person occupant cap after receiving "feedback from a number of Hosts who have listings that can house above 16 people comfortably."

Guests who violate Airbnb's rules will face serious consequences ranging from getting an account suspension or being removed from the platform, according to the company.

In 2021, more than 6,600 guests were suspended from Airbnb for attempting to violate the party ban.

The company says it introduced "a number of anti-party measures" to prevent unauthorized parties and party houses, including a 24-hour safety line. The company is also working with competitor Vrbo to share information on repeat "party house" offenders in the U.S.

The company is also offering property damage protection for hosts through AirCover.

"The ban has been well received by our Host community, and we’ve received positive feedback from community leaders and elected officials," Airbnb said. "As we build on this momentum, we believe the time is right to codify this policy."

Read more of this story on FOX Business.