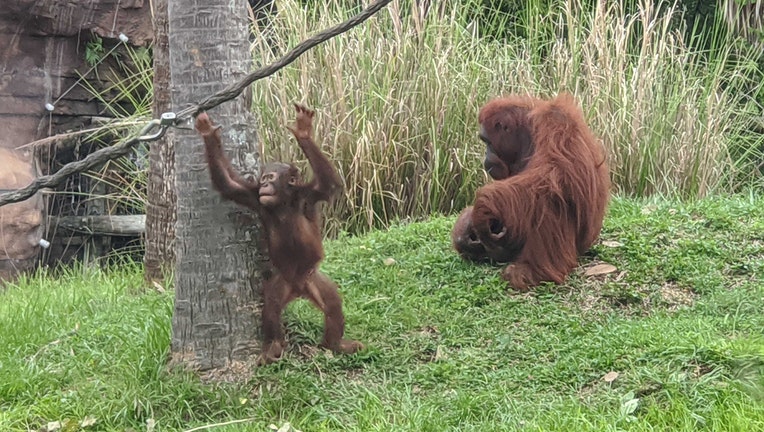 Photo of Malu with his mother, Luna, at Busch Gardens Tampa Bay.

For those who have visited the Tampa theme park, they likely paid a visit to the Jungala area, where the young orangutan swung from ropes and ran around with palm fronds in his hand.

Busch Gardens officials said Malu's health began declining in early July and began receiving medications for his symptoms. They did not specify those symptoms.

"A battery of ongoing tests including an MRI, and ongoing consultations with veterinary specialists in the area including neurologists, were unable to diagnose his condition," according to a statement posted on the Busch Gardens' Facebook page. "Despite every effort to save his life, he reached the point where the only compassionate thing for our dedicated veterinary and animal care team to do was to humanely euthanize Malu today while surrounded by the people who had loved and cared for him since his birth."

Malu was born in 2017, weighing in at just three pounds to mother, Luna, and father, Madju.

Busch Gardens Tampa Bay is welcoming a brand new bouncing baby Bornean orangutan to the park!  The tiny orangutan was born weighing in at just three pounds to mother, Luna, and father, Madju.

"Malu was a beloved member of our zoo family, and our team formed a very special bond caring for him and watching him grow from a tiny newborn into a playful and energetic juvenile, making his passing at this young age especially heartbreaking. We appreciate your continued support during this difficult time."