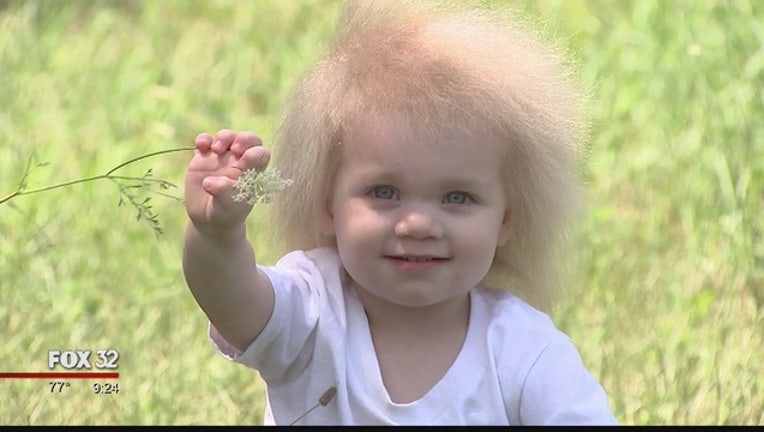 We all have bad hair days, for a suburban Chicago baby, it is a way of life.

She has a rare genetic condition called “Uncombable Hair Syndrome.” Her parents have made it their mission to educate the public and make sure their daughter is proud of who she is.

One look at 20-month-old Taylor McGowan and you are taken in by her beautiful eyes, her smile and her hair.

Her parents, Tom and Cara, thought it was baby peach fuzz. But it was Tom's mother who knew there was more.

"She looked on the internet and sure enough she found some pictures of girls that resembled Taylor,” Tom said.

And that is when they realized Taylor might have something called “Uncomable Hair Syndrome” -- a rare genetic disorder of the hair shaft of the scalp. The result is silvery blond or straw colored hair that is easily damaged and cannot be combed flat. It's been reported in only 100 cases globally.

Both parents generally have to carry the gene to pass it on.

Cara and Tom confirmed the diagnosis after sending blood samples to an expert in the field -- in Bonn, Germany.

"I was concerned she would face a life of bullying, adversity, maybe be made fun of at school,” mom said.

So Cara took matters into her own hands and decided to educate people. She started a Facebook page called “Baby Einstein 2.0.”

Cara says they can't go out in public without people making comments.

"You can hear whispers…oh my god, look at her hair and oh how fluffy, did you stick your fingers in a light socket, that was a good one when we were out eating at a restaurant,” Cara said.

Other similarities to Einstein: Taylor is smart and already has more than 200 words in her vocabulary. She is a perfectly healthy baby who brings smiles wherever she goes and loves flowers.

There is a chance Taylor’s hair could change, but in the meantime, her family is trying to spread a message of anti –bullying, accepting diversity and loving everyone for their individual uniqueness no matter what it might be.