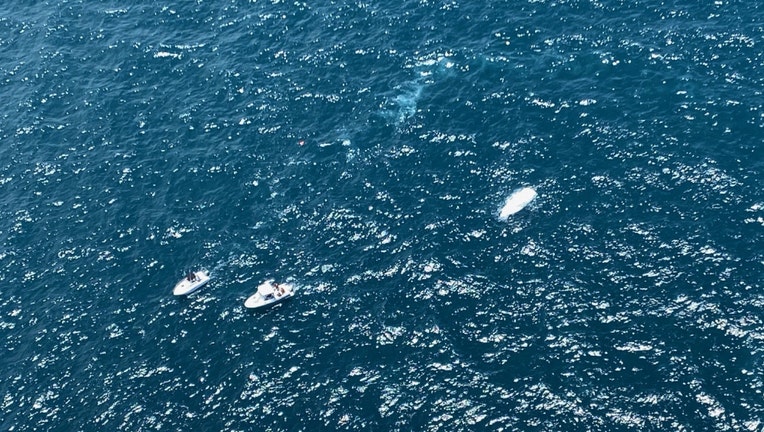 INDIAN ROCKS BEACH, Fla. - Five people were pulled from the water by good Samaritans in two separate incidents off Anclote and Indian Rocks Beach Saturday, according to the U.S. Coast Guard.

The Coast Guard says watchstanders received an urgent call from a man who could not find his two friends who were diving off his boat about seven miles west of Anclote. They issued an urgent marine information broadcast and directed the launch of a Station Sand Key small boat crew and an Air Station Clearwater MH-60 Jayhawk helicopter crew.

Two separate good Samaritan boat crews responded, located the divers, and brought them aboard their vessels.

Watchstanders also got a mayday call and a report from a boater who saw orange distress flares off Indian Rocks Beach. Again, the watchstanders issued an urgent marine information broadcast and directed the launch of a Station Sand Key small boat crew and an Air Station Clearwater MH-60 Jayhawk helicopter crew.

The good Samaritan who saw the flares responded, and pulled the three people to safety from the capsized vessel, about 22 miles west of Indian Rocks Beach.

"Good Samaritans are incredibly great assets, especially in cases where the Coast Guard or other responders are not in the immediate area," said Petty Officer 1st Class Brian Haley, Coast Guard Sector St. Petersburg operations unit watchstander. "We are so grateful for the good news of these rescues today and the great work of these outstanding good Samaritans."