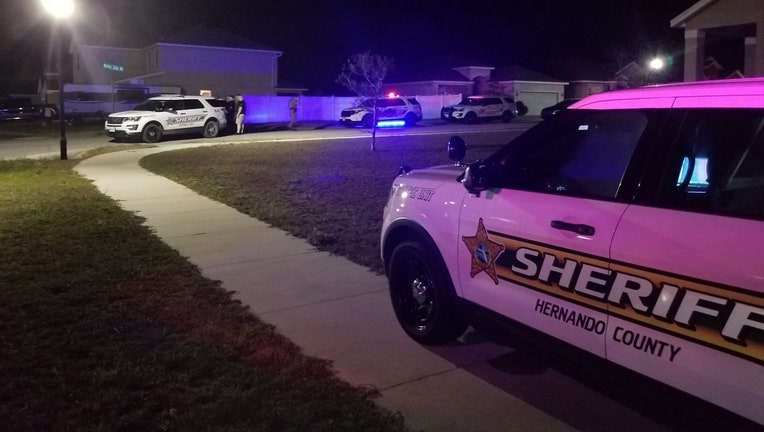 BROOKSVILLE, Fla. - A SWAT situation in a Brooksville neighborhood ended peacefully after a man barricaded himself inside a home with a shotgun and toddler, according to the sheriff's office. Officials said the man recently quit his job because his employer cut his working hours due to the COVID-19 pandemic.

Around 6:30 p.m. Tuesday, Hernando County deputies arrived to the home on Satinleaf Run, located in the Sherman Hills subdivision, after learning about an individual making suicidal statements.

Relatives of the man, who was not identified, were in the driveway, and told deputies the man made both suicidal and homicidal remarks, officials said. They also said he had a 12-gauge shotgun and a toddler inside the home. Deputies did not specify the relationship between the man and toddler.

Neighboring homes were evacuated and nearby roads were closed to set up a perimeter. Deputies tried to use a public address system to order the man to exit the home, but he didn't, officials said.

That's when a SWAT team was dispatched and officials continued to negotiate with the man inside the home.

According to the sheriff's office, the man apparently told them he had to quit his job because his boss cut his hours due to the coronavirus.

"As the male became more intoxicated, he started an argument with family members, stating something to the effect of, 'You better leave or I'll choke you and kill you,'" according to a statement by the agency. "A family member attempted to get the two toddlers and leave the residence quickly.  Unfortunately, the male grabbed one of the toddlers and went back inside the house.  At this time the male told the family member if the cops come, he would barricade himself in the residence."

More relatives arrived to convince the man to exit the home with the toddler, deputies said. At one point, a relative was able to remove the toddler from the home, but the man chased the family member outside and took back the child. Deputies said he ran back indoors.

Officials said, according to the relatives, he exited out the front door with a 12 gauge shotgun and told them he would kill himself. Then, he went back inside.

Just before 9:30 p.m., SWAT members entered the home and located the toddler, who was uninjured. The suspect was arrested.

Deputies said the shotgun was found "in close proximity to both the toddler and the male."