A new study suggests that facial muscles in dogs have evolved to improve communication with humans.

A team of European and American researchers recently published their study in the Proceedings of the National Academy of Sciences.

"Dogs were shaped during the course of domestication both in their behavior and in their anatomical features," the study’s authors said.

Scientists said they noticed that the muscle responsible for raising the inner eyebrow is present in dogs but not as much as in wolves, which they descended from, according to the study.

That movement produces what many call "puppy dog eyes." Scientists said humans produce the same movement when sad, which can trigger a similar response in dogs to show empathy.

As part of the study, scientists compared and contrasted the facial features of gray wolves and domestic dogs. They found a difference in the levator anguli oculi medialis muscle immediately surrounding the eye. Researchers said the muscle was more prevalent in dogs and they were able to control the movement with higher intensity compared to wolves. 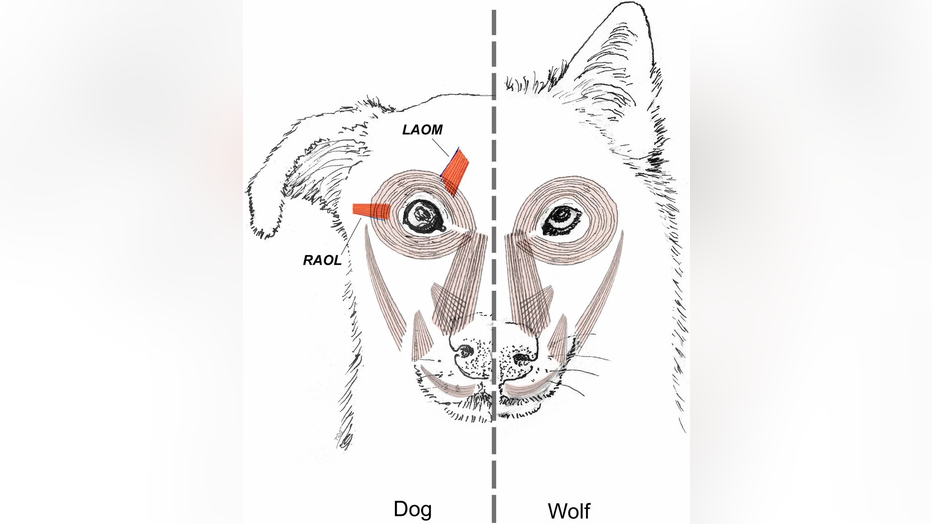 "Thus, wolves have less ability to raise the inner corner of their brows," the study said.
Researchers then studied the behaviors of dogs at a United Kingdom shelter and a stranger. The scenario was replicated with wolves at a park. They found that dogs were able to "significantly" raise their inner eyebrows and produce those "puppy-dog eyes" when interacting with the stranger more so than the wolves.

The study suggested that dogs were able to control eye movement over time due to their social interactions with humans.