FOX 26 Reporter Gabby Hart has more as a vigil was held for a Brazoswood teen who was brutally beaten by three teens.

LAKE JACKSON, Texas - A prayer vigil was held on Wednesday night in the community of Lake Jackson after the brutal beating of a 16-year-old high school football player, who is still fighting for his life.

Family members said all three suspects, who have been arrested and charged, were on the same Brazoswood High School football team as the victim 16-year-old Cole Hagan.

Cole is still in the ICU at Memorial Hermann Hospital. He suffered a brain injury, three skull fractures, and a broken collarbone.

His brother, Cory Hagan, tells FOX 26 he believes the fight was over a girl.

"These guys think they own these girls after they break up; they get to tell her who she can and can’t date after that, and they get mad about it," Cory said.

The attack happened Friday night at a party near Cherrywood Court in Lake Jackson. Hagan says his brother was set up by people whom he considered close friends.

"It’s unimaginable really," said Cory. "Allegedly there were two that lured him outside that were supposed to be his friends. I know a couple of the kids involved he actually went to prom with this year."

Cory says his brother is making some progress; he’s off the ventilator and breathing on his own. 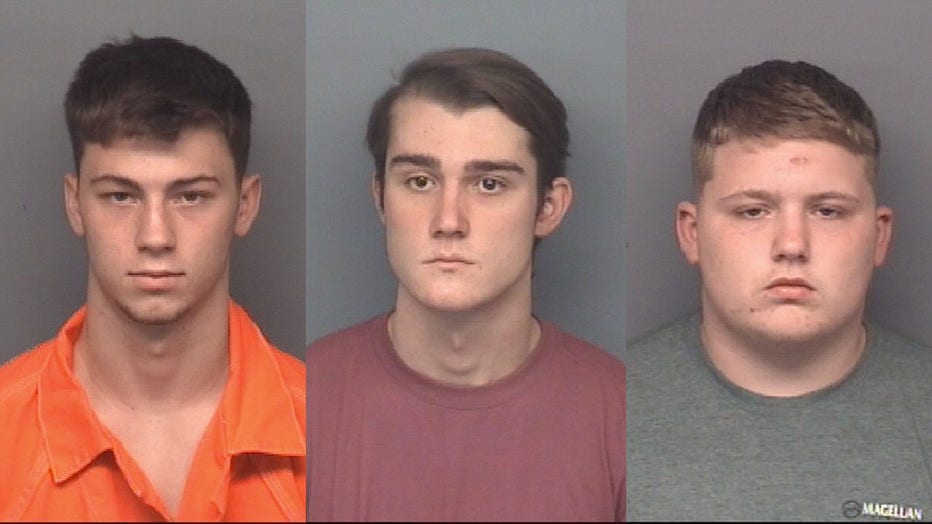 Three teens who play football at Brazoswood High School have been charged in the beating of 16-year-old teammate Cole Hagan. (Left to Right: Reid Mitchell, 17; Ayden Holland, 17; and Logan Huber, 18)

"I just hope that they’re held accountable to the full extent of the law. My brother’s not getting any deals," Cory said. "He’s still laying in a hospital bed, and we’re still praying he’s going to come back and be normal again, which we don’t know."

DOWNLOAD THE FOX 26 NEWS APP FOR THE LATEST ALERTS

Family members said they believe there’s video of the attack out there. They’re offering a $20,000 reward for anyone who comes forward and hands that video over to police.