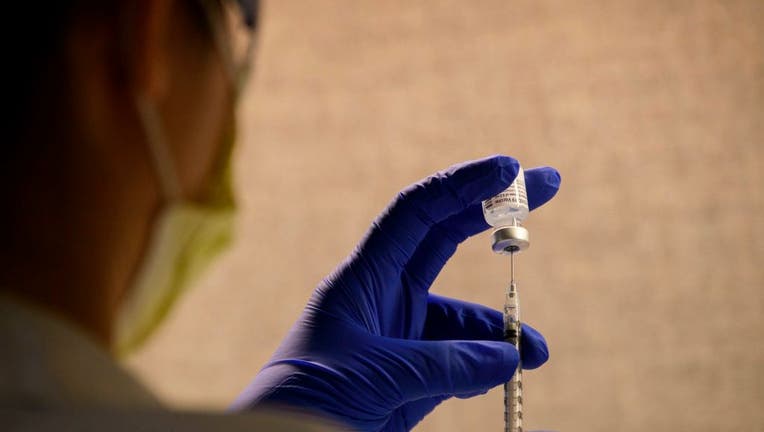 A pharmacist fills a syringe to prepare a dose of the Pfizer-BioNTech COVID-19 vaccine for frontline health care workers at a vaccination site at Torrance Memorial Medical Center on Dec. 19, 2020 in Torrance, California. (Photo by PATRICK T. FALLON/A

Leading health experts have dismissed suggestions that the U.S. could "space out" the second shot of coronavirus vaccines to cope with perceived distribution issues.

President Trump and Operation Warp Speed continually touted that they could vaccinate 20 million people by the end of December: in reality, the program saw just short of 3 million people receive the first shot of a two-dose program.

With cases surging across the country, some have suggested that the U.S. might follow the U.K.’s plan and space out shots – forgoing second shots so that more people can receive their first shot.

RELATED: Fauci sees 'glimmer of hope' as US COVID-19 vaccinations ramp up

Dr. Anthony Fauci immediately dismissed the idea, saying that it is "the right solution to the wrong question." He further stressed that there is no data on what happens if the second shot is not administered.

"The issue of giving it to people and not having a guarantee you’re going to get a second shot goes against the science," Fauci told "Meet the Press" host Chuck Todd. "The idea about stretching it out so you can give more people, that’s if you have not enough vaccine and you have people lined up to get the vaccine."

Fauci later said that a partial lockdown like what is being done in California was "not out of the question."

"We hope we don't have to di it countrywide, because we feel that if you adhere to the public health measures, you can turn things around short of a uniform lockdown," Fauci said.

"We have no data after one dose – if we leave it for one month, two months, three months – with maybe incomplete immunity, maybe even the wrong immune response," Fauci told "Face the Nation" host Margaret Brennan.

"Changing the decisions made, the choices made, which was to give two doses of the vaccine – the second dose gives you 10 times higher the immune response – without the data I think would not be responsible."

Both experts stood firm on their insistence that the vaccine distribution is going according to schedule: instead, it is an issue of getting people to take the shot.

Slaoui insisted that all targets for distribution have been met, with all states "receiving their allocation" of vaccines.

When pressed on what Operation Warp Speed can do to help boost the actual uptake of vaccines, Slaoui made a point that it is an issue with the states deciding how to use the vaccines.

"I don’t think we are able to identify exactly which long-term care facility or which CVS store should be getting which vaccine or how much vaccine," Slaoui explained. "That has to be done by people who have granular knowledge of their population, their movements."

Both Fauci and Slaoui cited that 1.5 million doses have been administered in the past 72 hours, claiming that such an increase in vaccinations proves that the program is catching up to targets.