TALLAHASSEE, Fla. - The state hoped adding toll roads to three parts of the state would help tackle Florida’s growth, but lawmakers aren’t so sure now about the M-CORES program.

"I think that there is emerging bipartisan consensus on this issue that this project is way too big and this project is unnecessary," said State Representative Ben Diamond, D-District 68 in Pinellas County, who introduced a bill to fully repeal the project.

Florida lawmakers walked back the controversial toll road project after getting feedback in the fall from rural and environmental communities. The Multi-Use Corridors of Regional Economic Significance (M-CORES) program became a law in 2019, directing the Florida Department of Transportation to add toll roads in three regions. It would expand the Florida Turnpike to the Suncoast Parkway and build from Polk County through Collier County.

Environmentalists advocated against the plans during public meetings and task force reports.

"If you’re kind of bulldozing through some of these natural areas, you’re losing wildlife habitat, maybe paving over or filling wetlands or important springs," said Lindsay Cross, the government relations director with Florida Conservation Voters, a nonpartisan nonprofit that advocates for the environment. "The road in the southern part of our state in the southwest-central connector that would slice right through some of our best panther habitat." 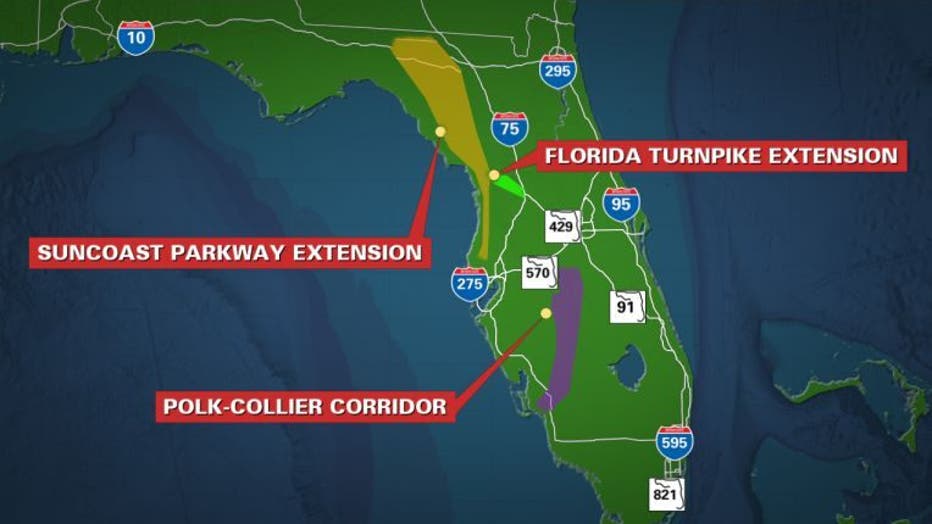 Last week, the Florida Senate approved SB-100, a bill that would partially repeal M-CORES, removing the southern connector from the plan along with rural areas like Polk County. The House still has to vote on the bill, and there are at least two other House bills in the legislature that aim to fully repeal M-CORES.

The Florida Farm Bureau Federation said farmers understand the perks that would have come with development from the toll roads, but the agricultural and rural communities valued their local atmosphere better.

Impacted communities said walking back the southern corridor is a good start, but the approved Senate bill leaves the northern toll roads on the table.

"We don’t think it goes far enough in fully repealing M-CORES where we know exactly what we’re getting and that’s protection of our water and our wildlife, rural communities and our taxpayers," said Cross.

M-CORES would require regular funding, so Rep. Diamond said he supports repealing the toll road program to divert the money to FDOT for use on existing projects.