TAMPA, Fla. - Florida is investigating why its online voter registration system crashed just before the deadline for the upcoming presidential election, saying unexpectedly heavy traffic that can't be immediately explained poured in during the closing hours.

Reports of widespread problems spread just before 7 p.m., with many saying the site was either slow or unreachable for large stretches of time. A state official told The Associated Press on Tuesday that at times more than half a million attempts an hour hit the system Monday.

The official spoke on condition of anonymity because they were not authorized to speak publicly about the issue. Gov. Ron DeSantis has scheduled a noon press conference to discuss the situation and to announce whether he will extend the deadline.

Meanwhile, some Florida leaders are calling for the state to extend the registration deadline.

"The voter registration deadline in Florida is just hours away, and the online voter registration website is broken. This is unacceptable. @GovRonDeSantis. Fix it now," Commissioner of Agriculture and Consumer Services Nikki Fried tweeted to Florida's governor Monday.

As of Tuesday morning, it remains unclear what caused the issue and whether the state will extend the deadline because of the glitches.

According to Laurel Lee, the secretary of state, registertovoteFlorida.gov was down for 15 minutes on Monday due to a high-user volume.

However, FOX 13 staff had issues throughout the evening, with several long periods where the site lagged or couldn't load at all. The issue sent some voters to their local Supervisor of Elections offices for paper copies of registration applications.

"Nothing works online," said Doug Earns, who came to the Hillsborough County election supervisor's office to register after the website was down. "The system is so backed up and jammed up and nothing works."

"This is just latest attempt from the Republican leaders in Florida to limit democracy. The Florida Voter Registration website not working on the last day to register to vote in Florida is blatant voter suppression. Fix the website, stop the suppression, and let democracy work." 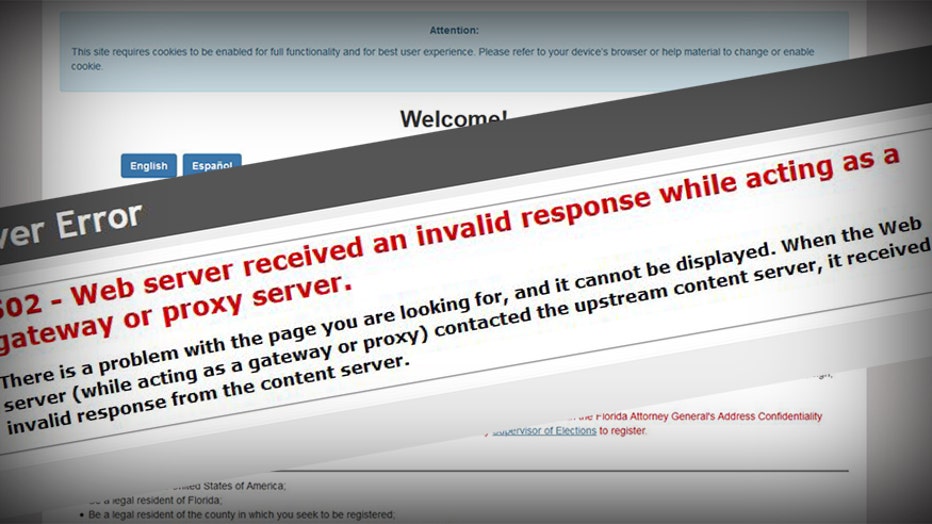 Gov. Ron DeSantis' office told FOX 13 they have a web team looking into why the registration site had issues Monday. They, based on early indications, believe the problem was an overload of traffic to the site.

This isn't the first time a state site has struggled to keep up with traffic. Florida's voter registration site has struggled in the past with high volumes of visitors, and last spring, there were extensive issues with the state's unemployment site.