Four police officers were treated for smoke inhalation after pulling a man from a burning car in a Florida city. Body camera footage from the West Melbourne Police Department showed the group of officers frantically working to rescue the man.

WEST MELBOURNE, Fla. - Four police officers were treated for smoke inhalation after pulling a man from a burning car in a Florida city.

Around 10:30 a.m. Thursday, police with the West Melbourne Police Department, located in Brevard County, were investigating a separate incident at a Hampton Inn, located at 4520 Durham Drive. That’s when they were informed of an unrelated vehicle fire.

The car was found at a nearby parking lot.

"Flames were visible as the officers approached the vehicle, which appeared to have crashed. They also observed smoke billowing out, making it difficult for the officers to determine if anyone was inside," according to the West Melbourne Police Department.

As they approached the vehicle, the driver inside the smoke-filled car was heard calling for help.

Bodycam footage released by the agency shows officers frantically working to rescue the man. One officer was seen using a fire extinguisher to break the passenger window. Eventually, another officer was heard saying 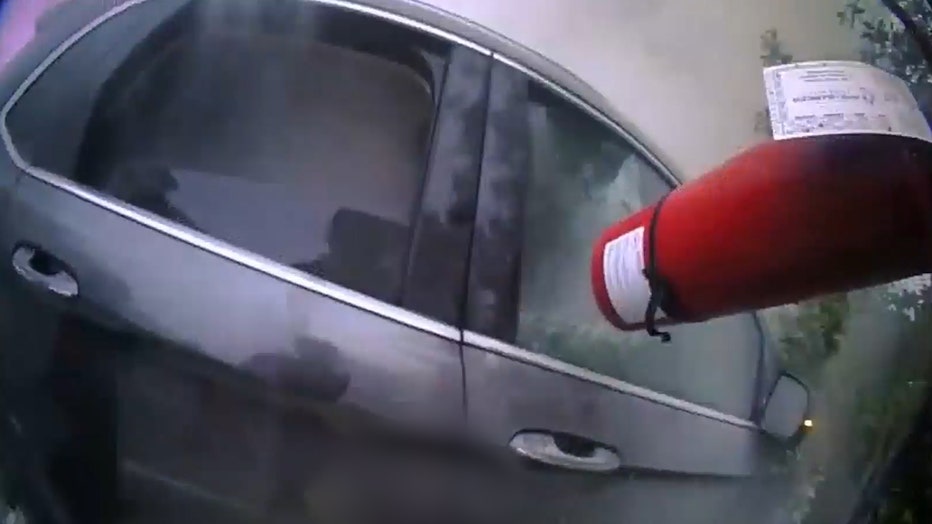 "Had it not been for the swift action of these officers, things may have ended differently," West Melbourne Police Sgt. Graig Erenstoft said in a statement.

Police said four officers were transported to a hospital for smoke inhalation – two from West Melbourne and two from Palm Bay -- and one officer remained in the hospital as of Thursday for observation.

The man they rescued was hospitalized and in stable condition, they said.