Family, friends, activists, and celebrities gathered Thursday to honor the life of George Floyd in Minneapolis

MINNEAPOLIS (FOX 9) - Friends, family and much of the community said goodbye to George Floyd at a memorial service in Minneapolis Thursday afternoon, the first of three memorial services for Floyd before his funeral in Houston next week.

The private service was attended by celebrities, civil rights activists, politicians and family members to both celebrate Floyd's life and mourn a man whose death at the hands of police has sparked protests nationwide and calls for an end to racial injustice. 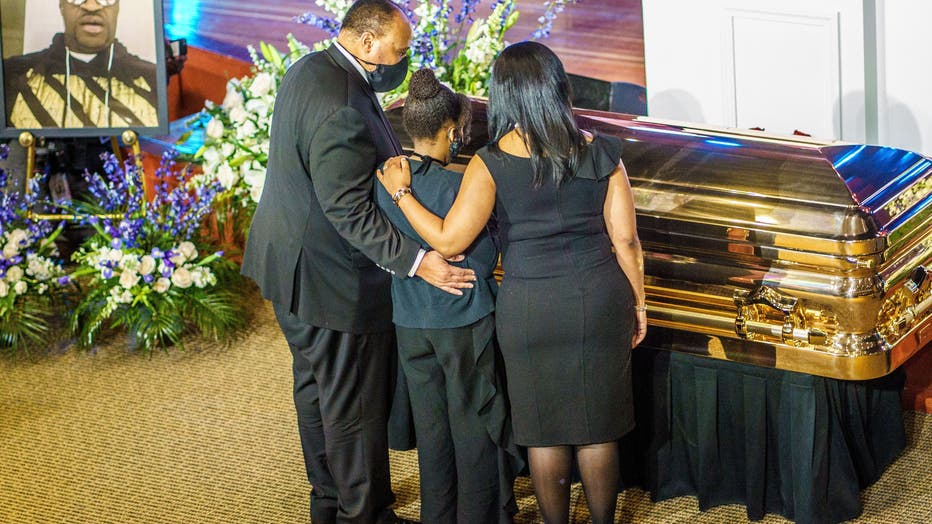 As people filed into the sanctuary for the memorial service Thursday, Frey was seen openly weeping as he knelt in front of Floyd's casket to pay his respects.

Minneapolis Mayor Jacob Frey could be seen crying at the casket of George Floyd in the minutes leading up to his memorial service at North Central University Thursday.

REV. AL SHARPTON DELIVERS POWERFUL EULOGY: 'GET YOUR KNEE OFF OUR NECKS'

Rev. Al Sharpton delivered a powerful eulogy during a memorial for Floyd Thursday in Minneapolis, in which he metaphorically compared racial inequalities in the country to having a “knee on our neck.”

“George Floyd’s story has been the story of black folks, because ever since 401 years ago, the reason we could never be who we wanted and dreamed of being, is you kept your knee on our neck,” the 65-year-old said. 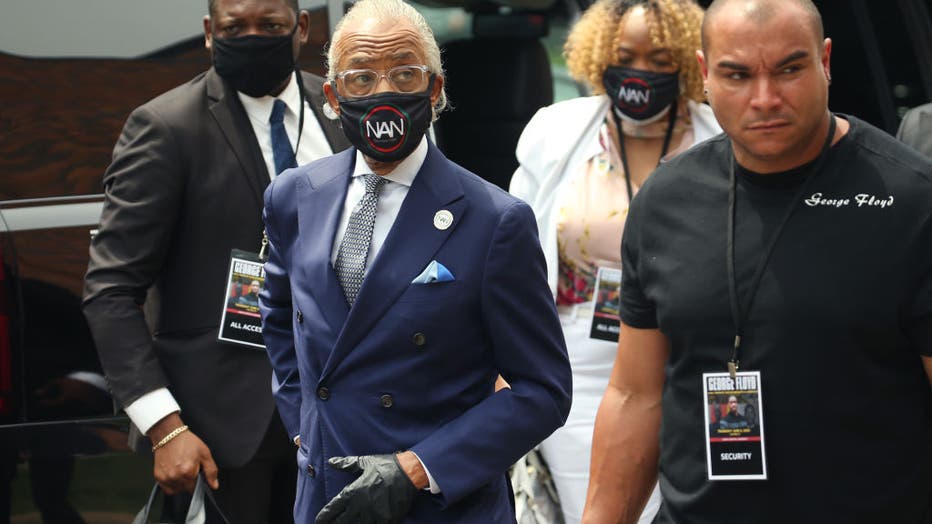 MINNEAPOLIS, MINNESOTA - JUNE 04: The Rev. Al Sharpton arrives with family members of George Floyd at Floyd's memorial service at North Central University on June 4, 2020 in Minneapolis, Minnesota. Floyd died while in police custody on May 25, after (Scott Olson/Getty Images)

Several members of Floyd's extended family spoke at the memorial service, describing what the Floyd family house was like growing up, sharing stories about George’s sense of humor and talking about how he helped raise a fatherless household in Houston.

"He was teaching us how to be a man because he was in this world before us,” said Rodney, George's youngest brother.

His siblings Philonese Floyd, Rodney Floyd, Shareeduh Tate and his nephew Brandon Williams described what the Floyd family house was like growing up, shared stories about Floyd's sense of humor and showed how he helped raise a fatherless household in Houston, Texas. Plus, his nephew talks about their shared love of sports.

“No matter who you talked to, they will all say the same thing, that George was somebody who was always welcoming, always made people feel like they were special,” Shareeduh Tate, Floyd's cousin, said. “Nobody felt left out. When he would enter into a room, everybody would feel as though they were special. He would embrace them.”

ATTORNEY: GEORGE FLOYD SURVIVED COVID-19, BUT NOT ‘PANDEMIC’ OF RACISM

The attorney representing George Floyd’s family, Benjamin Crump delivered an address at the memorial service, vowing for justice for Floyd.

Crump told attendees that Floyd was able to survive COVID-19, but could not survive what he called the “pandemic” of racism in America.

Attorney Benjamin Crump told the memorial service that George Floyd was able to survive COVID-19, but couldn't survive what he called the pandemic of racism in America.

Crump later made a powerful proclamation: “Do not cooperate with evil—protest against evil.”

Floyd family attorney Benjamin Crump pleaded for justice with the attendees of the George Floyd Memorial with a quote from Martin Luther King, Jr.

Crump referred to the young people in the streets “protesting against the evil, the inhumane, the torture, that they witness on the video.”

8 MINUTES AND 46 SECONDS MOMENT OF SILENCE FOR GEORGE FLOYD

An 8-minute, 46-second moment of silence capped off George Floyd’s Minneapolis memorial service Thursday, representing the amount of time he was held down by police.

Following his eulogy, the Rev. Sharpton asked attendees to stand in silence for 8 minutes and 46 seconds to remember Floyd—the same amount of time Floyd spent on the ground with now-fired Minneapolis police officer Derek Chauvin's knee in his neck. 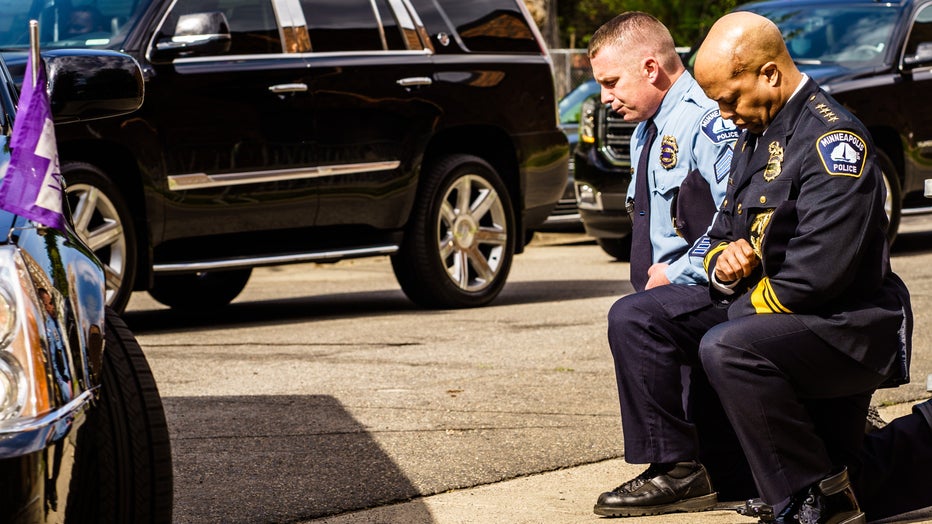 Minneapolis Police Chief Medaria Arradondo (R) kneels as the remains of George Floyd are taken to a memorial service in his honor on June 4, 2020, in Minneapolis, Minnesota. - On May 25, 2020, Floyd, a 46-year-old black man suspected of passing a cou (KEREM YUCEL/AFP via Getty Images)

A hearse carrying George Floyd arrives at North Central University in Minneapolis ahead of the memorial service.

Hagen, the president of the university, urged every college in the United States to follow suit and create their own George Floyd Memorial Scholarship.

"I am now challenging every university president in the United States to establish your own George Floyd Memorial Scholarship Fund," Dr. Hagen proclaimed.