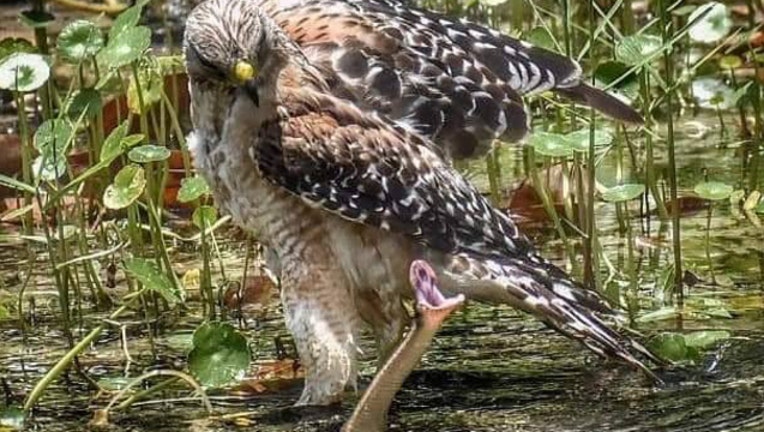 GREEN COVE SPRINGS, Fla. (FOX 13) - A Florida woman who captured a photo of a red-tailed hawk got quite a surprise when she captured it grabbing its lunch.

Shari Ancelet said she was headed to Green Cove Springs in Clay County with her camera and some friends while pushing her friend's grandbaby in a stroller.

She said she spotted the hawk above her in a tree and went to snap a few photos, not realizing it was about to have lunch. Just then, it swooped down and grabbed a snake in the water.

The photo snapped by Ancelet and shared by the Florida Fish and Wildlife Conservation Commission shows the two in a face-off just before the hawk carried the snake off.

While that shot was amazing, Ancelet said she was also watching a mockingbird nearby, and missed the opportunity to get the shots of the hawk in flight with the snake dangling from its talons.

Though the snake tried to fight it, the hawk eventually won, she said.