TAMPA, Fla. - Rick Drury knows how the pizza business is supposed to be. He’s been doing it for nearly 30 years. But lately, hiring has been anything but easy at his shop, Precinct Pizza.

"I put the word out all over Facebook, Instagram, newspaper ads, everywhere we could think of, but no one shows up for interviews, no one comes out to apply," he said.

"The problem is, people have gotten accustomed to being home, and being paid to be home," he said. "Some people didn’t want to come back to work because they’re scared of COVID, but that reason has pretty much gone out the door now because everyone is vaccinated or at least had the chance to be vaccinated." 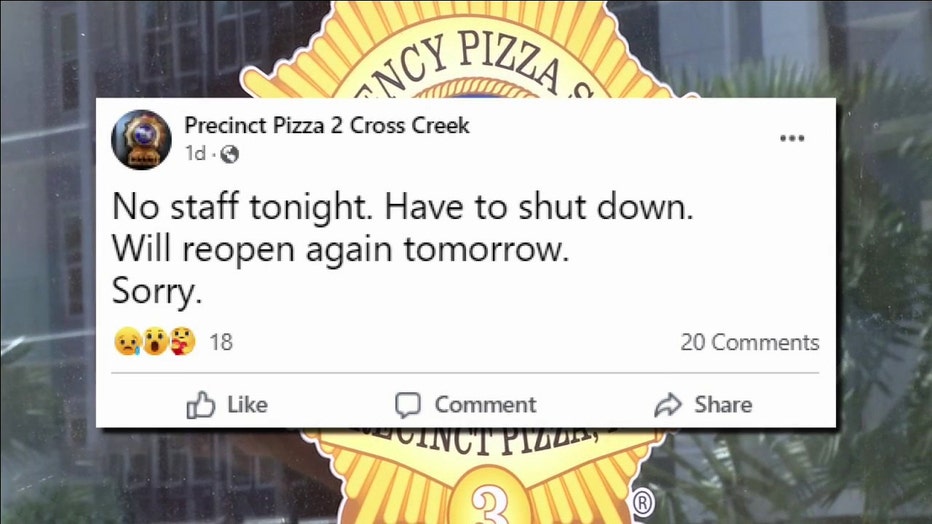 Of those that were hired, he says many don’t show up.

"I had five people scheduled on Sunday, and only one person showed up, so it’s like, how do you run a pizzeria with one person? It’s just – we can’t do it, there’s no way I could do it," he said.

His family gave in that night, closing early and writing a post to their customers on Facebook.

"No staff tonight, have to shut down," he wrote. "Will reopen again tomorrow. Sorry."

His wife and two children are filling the needs until they are fully staffed, but he says Sunday night, his family was exhausted from working overtime.

"We couldn’t do it with one person," he said. "And the employee that did show up, she understood when we closed down and she went home – but it’s sad for her because she wanted to work. It’s not right."

"We had to close one of our locations until who knows when. We can't keep staffed either," one woman wrote.

"The labor shortage is real," wrote another. "I’m working 60-plus hours weekly to cover, and it’s not enough. Please be nice to restaurant staff during these times."

Drury said every position in his business has an opening.

"In our current store, we have pretty much everything – I mean, drivers, kitchen people, I would take a 14-year-old who wants to answer phones. In my new location which we hope to open downtown in 2-3 more weeks, it’s everything. We don’t have anybody."

"I try to take care of people when I can. I give them extra money when I can, but I’m struggling too, I can only make so much. The price of food has gone through the roof, so it’s insane now," he said. "I’m working harder to make less money."

Drury says he’s concerned he won’t be able to hire employees for his new downtown Tampa location, set to open in a few weeks. If that’s the case, he’s considering pulling employees from his other location in New Tampa.