The plane couldn't taxi fast enough for the families that are waiting at MacDill Air Force Base in Tampa.

TAMPA, Fla. - There was a joyous homecoming at MacDill Air Force Base Monday as more than 30 airmen who were deployed to the Middle East for six months arrived back home safely. Families said they were relieved after their loved ones were overseas during some tense times.

The plane couldn't taxi fast enough for the families that are waiting at MacDill Air Force Base in Tampa Monday. Kari Rouse, her 6-year-old son, Elijah, and her 3-year-old, Miles, have counted down the day until dad gets home.

"Handling two little boys by yourself can be quite a handful, that’s for sure," said Rouse.

She watched the recent events in Afghanistan as refugees were taken in at the airbase in the Persian Gulf country of Qatar, where her husband, Christopher, was deployed. 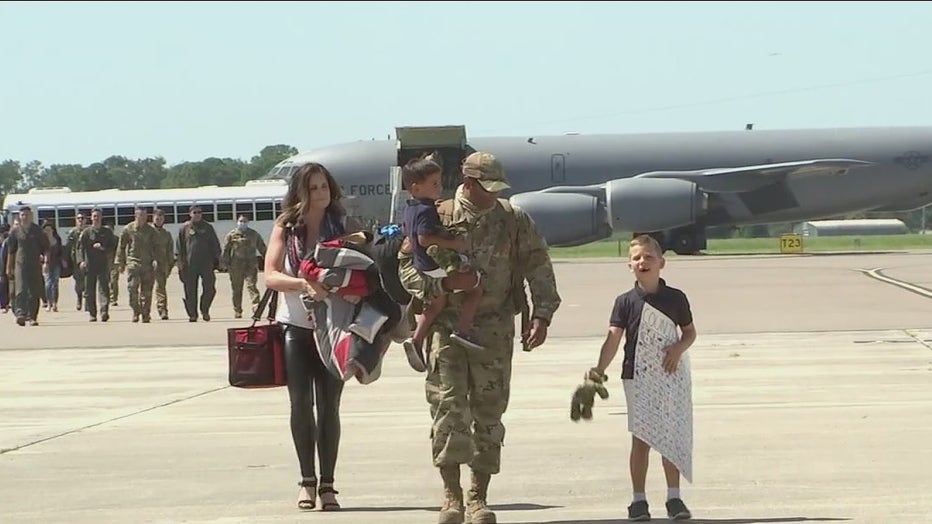 "When things started happening over there, it was very scary," Rouse recalled. "I was on my knees praying a lot."

Her prayers were answered Monday when Christopher emerged from the KC-135 that arrived at MacDill from Qatar. He embraced his family for the first time in six months.

What did he miss most?

"These little two," he said, hugging his young sons.

Thirty-three aircraft maintainers came to Tampa Monday. In Qatar, when they weren’t working on planes, some volunteered to help the arriving refugees.

"It’s tough conditions," said Col. Benjamin Jonsson, base commander at MacDill. "The things we ask them to do are challenging, but it’s critical to our national defense."

The aircraft maintainers from MacDill helped keep the refueling tankers flying while they were in Qatar. Jonsson says that was essential.

"We obviously had a lot of missions overhead in Afghanistan to support that effort," said Jonsson. "Not just the cargo aricraft that were taking them in and out, but the fighter aircraft that were protecting folks on the ground."

The returning airmen will get two weeks of R&R to spend time with their families. It will be at least a year until they can be deployed again.

Christopher and Kari Rouse walked off the flight line holding the hands of their two young sons. On this day, homecoming is the main mission at MacDill.