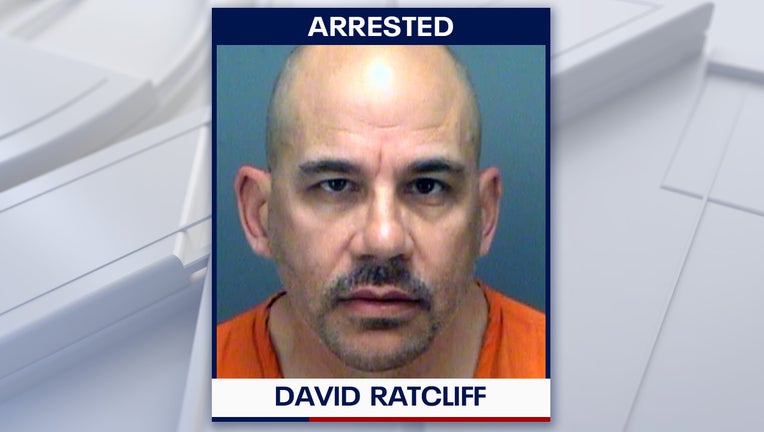 CLEARWATER, Fla. - A serial bank robber with a lengthy rap sheet is back behind bars after police say he robbed a Clearwater bank.

Clearwater police say 55-year-old David Marc Ratcliff served time in federal prison after being convicted of six counts of armed bank robbery in the late 1990s. He was suspected of as many as 19 bank robberies along and near the Interstate 4 corridor two decades ago, earning him the nickname "the I-4 bandit."

Investigators also identified Ratcliff as their suspect in bank robberies earlier this month in Temple Terrace and St. Petersburg.

Clearwater police received a call about a holdup at the Wells Fargo Bank at 639 S. Ft. Harrison Avenue around 10:45 a.m. Tuesday.

The suspect fled from the bank, but a witness saw him get into a red Dodge Magnum and drive away from the area.

A Clearwater police detective spotted Ratcliff's vehicle minutes later, but when a Pinellas sheriff's deputy attempted to conduct a traffic stop shortly after on West Bay Drive, they said the suspect fled at a high rate of speed.

Law enforcement did not pursue on the ground, but tracked Ratcliff's vehicle with the help of a sheriff's office helicopter.

They followed him into Belleair Beach, where he abandoned his car and tried to steal a truck on Harbor Drive. Police said the truck owner fought with Ratcliff, who then fled from the scene.

The suspect was caught by a sheriff's office K9 minutes later. He was taken to Morton Plant Hospital for treatment before being transported to the Pinellas County Jail.

"Thanks to information from witnesses, alert Clearwater Police detectives and the Pinellas County Sheriff's Office, we are grateful this repeat offender was captured," said Clearwater Police Chief Daniel Slaughter. "Based on Ratcliff's most recent string of crimes, we are hopeful this criminal career is finished for good this time."