Frances Haugen, a former product manager for Facebook, testified before a Senate committee investigating online safety for children, revealing the company's practice of choosing profit over actions that would further protect users. Haugen provided the committee with documents that she said "prove that Facebook has repeatedly misled us about what its own research reveals about the safety of children, its role in spreading hateful and polarizing messages, and so much more."

SAN FRANCISCO - Instagram rolled out several new features aimed at improving the safety of its teenage users, including an option that prevents people from tagging or mentioning teens and another that urges them to take a break from the app, ahead of a congressional hearing with the company’s chief executive.

Adam Mosseri, the head of Instagram, said in a blog post published early Tuesday that parents will be able to see how much time their teens spend on the social media app and set time limits. These new features will launch in March, which also includes the ability for teens to notify their parents if they report someone.

"This is the first version of these tools; we’ll continue to add more options over time," Mosseri wrote in the post.

Instagram is also rolling out a "Take a Break" feature, which asks users to stop using Instagram if they have been scrolling for a certain amount of time. The tool, which needs to be turned on, launched Tuesday in the U.S., the U.K., Canada, Ireland, New Zealand and Australia and will be available elsewhere by early 2022, according to the company.

Another feature will stop people from tagging or mentioning teenage users that don’t follow them.

"We’re testing these changes to further minimize the possibility that teens will hear from those they don’t know, or don’t want to hear from, and plan to make them available to everyone early next year," Mosseri wrote.

The app will also start nudging teens toward different topics if they’ve been dwelling on one topic for a while. 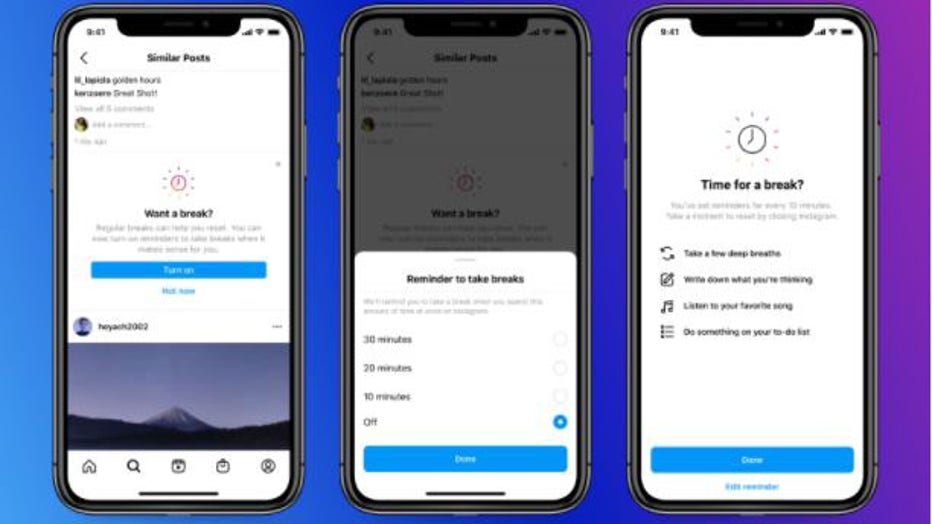 Instagram has launched the “Take a Break” feature, which has to be enabled. If someone has been scrolling for a certain amount of time, the app will ask them to take a break from Instagram and suggest that they set reminders to take more breaks in th

The new tools were released a day before Mosseri is scheduled to appear before a Senate panel as part of a series of hearings on protecting children online, according to the New York Times. Mosseri on Wednesday is expected to face questions about whether apps like Instagram harm teens amid heightened scrutiny on Facebook — renamed Meta — its parent company.

Facebook has weathered backlash about not doing enough to rein in harmful content and faces new legislation looking to impose restrictions on tech giants.

"Facebook wants you to get caught up in a long, drawn-out debate over the minutiae of different legislative approaches. Please don’t fall into that trap," Haugen testified on Dec. 1. "Time is of the essence. There is a lot at stake here. You have a once-in-a-generation opportunity to create new rules for our online world. I came forward, at great personal risk, because I believe we still have time to act. But we must act now."

Haugen also has offered guidance on new online rules that are much further along in the U.K. and European Union, which has pioneered efforts to rein in big technology companies.