Florida wildlife officials say the Argentine black and white tegu population is colonizing further north, and they have a big appetite. They are non-native to the Sunshine State.

TAMPA, Fla. - An invasive lizard species calls Florida home, but as its numbers continue to multiply in the wild, they are apparently eating native species.

The population rate of Argentine black and white tegu lizards has increased in recent years, according to University of Florida scientists. Even the colder months don't have a heavy impact on them. They just burrow themselves and wait the winter out underground.

They are normally spotted in South Florida, but have been seen as far north as St. Lucie County, reports the Florida Fish and Wildlife Conservation. It’s likely a problem that started with tegu lizards being released by owners, or they escaped.

They pretty much eat anything – from bananas to gopher tortoise babies. 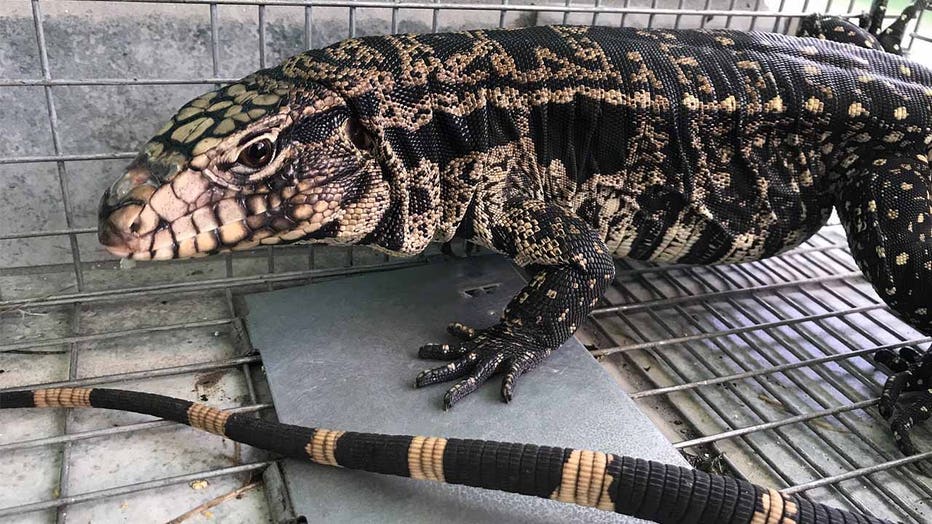 "Tegus prey upon the nests of other animals, and researchers have documented tegus eating American alligator eggs and disturbing American crocodile nests in Florida," FWC reported. "Recent gut content analysis of tegus by the FWC revealed that they consume Threatened juvenile gopher tortoises and agriculturally valuable foods, highlighting the impact this species may have on sensitive wildlife and agricultural lands."

The gopher tortoise is protected under Florida law, along with the burrows they build for shelter. Its population is already threatened due to habitat destruction, fragmentation, and degradation.

Protections for gopher tortoises eased due to habitat loss

There are rules in place to protect Florida's gopher tortoise population from land development, but a lack of places to relocate them has forced the state to relax the rules and environmentalists say that's bad news for the reptiles.

The stomach analysis was completed on 124 tegu lizards, and FWC found they eat frogs, toads, other lizards, and even snakes.

In 2019, officials managed to remove 1,425 tegu lizards from the wild. That’s actually double what they were able to remove just four years before that.

This year, FWC added the Argentine black and white tegu to its prohibited species list. If you owned one prior to April 29 of this year – when the rule was put into place – you can keep it until it dies, but you must have a permit.

Pet owners had until the end of July to tag their lizards. The species can’t be released, and if owners do release them or their tegu lizard escapes, they can be traced back to the owner.

Essentially, they cannot be brought into the state as a pet, and are limited to the purposes of research, education, control, or "eradication," according to FWC rule.

To learn more about the Argentine black and white tegu, click here. You can read more about FWC’s non-native species list here.