STRESA, Italy - The investigation into Italy's cable car disaster that killed 14 people will focus on why the lead cable snapped and why the emergency brake didn't engage and prevent the cabin from careening back down the mountain until it pulled off the support line and crashed to the ground, the lead prosecutor said Monday.

Verbania Prosecutor Olimpia Bossi outlined the contours of her investigation based on what she said was objective, empirical fact of what occurred: "The brakes of the security system didn't work. Otherwise the cabin would have stopped," she said. "Why that happened is naturally under investigation."

Bossi spoke to reporters as the lone survivor of Sunday's horrific tragedy, a 5-year-old Israeli boy living in Italy, remained hospitalized in Turin in intensive care with multiple broken bones.

The Israeli foreign ministry identified him as Eitan Biran. His parents, younger brother and two great-grandparents were among the dead, the ministry said, correcting an earlier statement that had included Eitan among the victims.

Italian media identified all the other victims as residents of Italy. 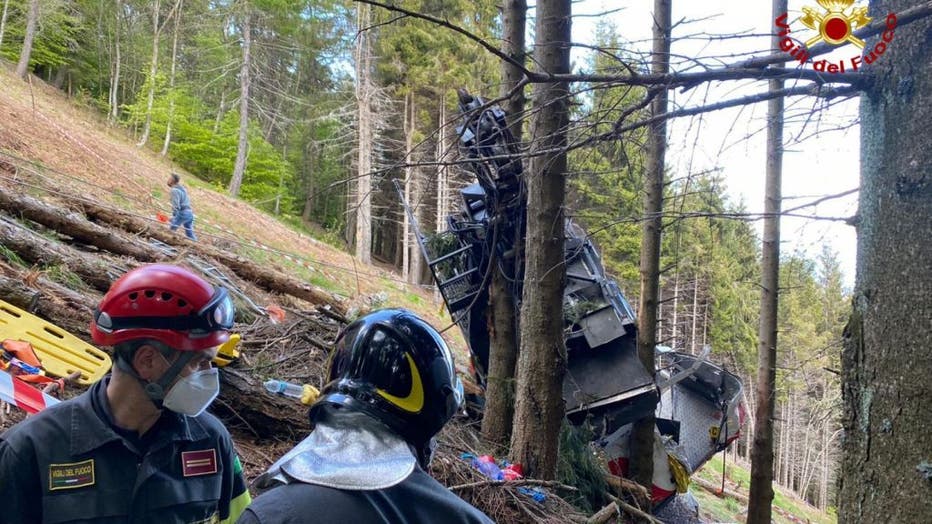 Italian fire fighters are seen near the crashed cable car after it fell from the Stresa-Alpine-Mottarone line near Lake Maggiore in Stresa, Italy on May 23, 2021. (Photo by Italian Fire Department/Handout/Anadolu Agency via Getty Images)

The disaster, in one of the most picturesque spots in northern Italy — the Mottarone mountaintop overlooking Lake Maggiore and other lakes near Switzerland — raised questions anew about the quality and safety of Italy’s transport infrastructure.

Transport Minister Enrico Giovannini visited the site Monday and announced a commission of inquiry to investigate the "technical and organizational causes" of the disaster, while prosecutors will focus on any criminal blame.

Giovannini told reporters in Stresa, the lakefront town at the foot of the Mottarone peak, that the aim of the investigative commission would be to "ensure this never happens again."

The transport ministry said a preliminary check of the cable line’s safety and maintenance record show that the whole lift structure underwent a renovation in August 2016, and that a full maintenance check was performed in 2017 and more inspections last year.

In November and December 2020, other checks were performed on the cables themselves, including magnetic inspections on the primary cables of the lift: the cable that pulls the cabin up the mountain, the support cable that holds the car and the rescue cables. In December another visual check was performed, the ministry said.

The mayor of Stresa, Marcella Severino, quoted witnesses as saying they heard a "loud hiss," apparently when the lead cable snapped. She said the cabin reeled back down the line until it apparently hit a pylon and then plummeted to the ground. It rolled over two or three times before crashing into trees, she said.

Some of the bodies were thrown from the car and were found amid the trees, rescue workers said.

In on-camera comments to LaPresse news agency and other reporters in her office, Bossi noted that the emergency brake had engaged on the other cable car that was traveling in the opposite direction, down the mountain.

She said the possible crimes that are being investigated are multiple manslaughter, attempted manslaughter and an "attack on public transport." She acknowledged the transport crime was an unusual hypothesis, but justified it by recalling that a cable car up and down a mountain is a form of public transportation.

The funicular line is popular with tourists and locals alike to scale Mottarone, which reaches a height of 1,491 meters (4,900 feet) and overlooks several picturesque lakes and the surrounding Alps of Italy’s Piedmont region. The mountain hosts a small amusement park, Alpyland, that has a children’s rollercoaster, and the area also has mountain bike paths and hiking trails.

It only reopened a few weeks ago after Italy’s wintertime coronavirus lockdowns lifted, and officials hypothesized that families were taking advantage of a sunny Sunday to visit the peak and take in the view.

The mayor declared a day of mourning for Stresa, which like tourist destinations around the country had suffered from COVID-19 lockdowns that not only slashed foreign tourism but cut local day-trip visits by Italians.

The Israeli foreign ministry identified the five Israelis killed as Eitan's parents, Amit Biran and Tal Peleg-Biran, an Israeli-born couple studying and working in Pavia. Biran’s Facebook page identifies him as a medical student at the University of Pavia.

Their 2-year-old son, Tom Biran, died at the scene, as were Peleg-Biran’s grandparents, Barbara and Yitzhak Cohen. The ministry said they had arrived in Italy on May 19 to visit their granddaughter and great-grandchildren.

Amit Biran’s sister, Aya, wasn't involved in the crash and was at the bedside of Eitan at Turin’s Regina Margherita hospital, the foreign ministry said, adding that other family members were flying to Italy from Israel to join her.

In a tweet Tuesday, Italy's national firefighting squad said they were cheering for Eitan even as they mourned the others: "Forza Eitan (Go Eitan), all the firefighters are with you."

The head of intensive care at the Turin hospital, Dr. Giorgio Ivani, said Eitan was sedated and intubated after surgery to repair his broken bones. An MRI scan was planned for Monday to assess any brain injury, though hospital officials have noted that he was conscious when he arrived.

Among the other victims were an Italian researcher, Serena Consentino, and her Iranian-born companion, Mohammadreza Shahaisavandi, according to a statement from Italy’s National Council of Research, where Consentino had a research grant.

Also killed at the scene were Vittorio Zorloni and his wife, Elisabetta Persanini. Their 6-year-old son, Mattia, died at Regina Margherita after multiple efforts to restart his heart, hospital officials said.

A young couple, Silvia Malnati and Alessandro Merlo, were killed while Malnati’s brother stayed down in town and frantically tried to call her, Italy’s La Stampa newspaper reported, quoting the brother.