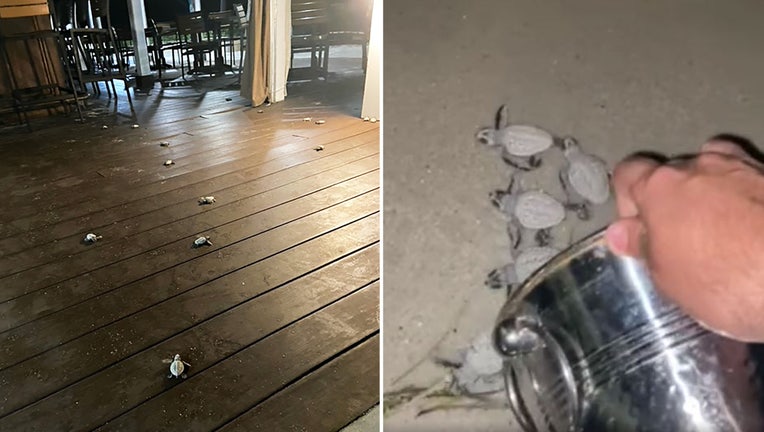 KEY WEST, Fla. - An officer in the Florida Keys came to the rescue of lost sea turtle hatchlings heading toward city lights instead of the ocean.

Key West police said officer Randy Perez received the call Monday night about the turtles, who had hatched on the beach by the Pier House restaurant.

Instead of heading to the water, the hatchlings could be seen trekking across the wooden decking of the closed restaurant.

Perez and a worker from the Key West Wildlife Rescue Center gathered the turtles and brought them back to the water's edge so they could swim safely out to sea.

"There you go, little guys! Go, go, go!" Perez can be heard encouraging the turtles in a short video on the police department's Facebook page. Even then, he had to redirect a couple of hatchlings, who again tried to head toward the lights instead of the ocean.

Police shared photos of the turtle rescue and used the opportunity to remind residents and businesses about the dangers of light pollution, which attracts sea turtle hatchlings to head in the wrong direction instead of the ocean.

"We have a large number of nests this season," the agency wrote. "PLEASE remember to turn off the lights and flashlights."