Flu, colds could be worse for kids after pandemic

TAMPA, Fla. - As thousands of people return to offices, schools, and packed events, doctors say more sicknesses could start to spread. Medical experts warn that little ones may be the most at risk.

All of the precautions taken during the pandemic helped keep COVID-19 cases down and most other seasonal viruses away.

"Flu just dropped off, completely dropped off the map this flu season, there was basically none," said USF virologist Dr. Michael Teng.

For many, the masks are coming off and vigilance with hand hygiene is waning. Meanwhile, being together is more important than being six feet apart.

As a result, doctors say more people are getting sick with colds and respiratory viruses.

"I’m really interested to see what happens with flu," Teng said. "Flu is the one to watch I think."

Experts say the lack of exposure to the flu during the pandemic could make folks more susceptible to the virus when it returns, meaning influenza outbreaks could be more widespread than normal or occur at unusual times of the year. 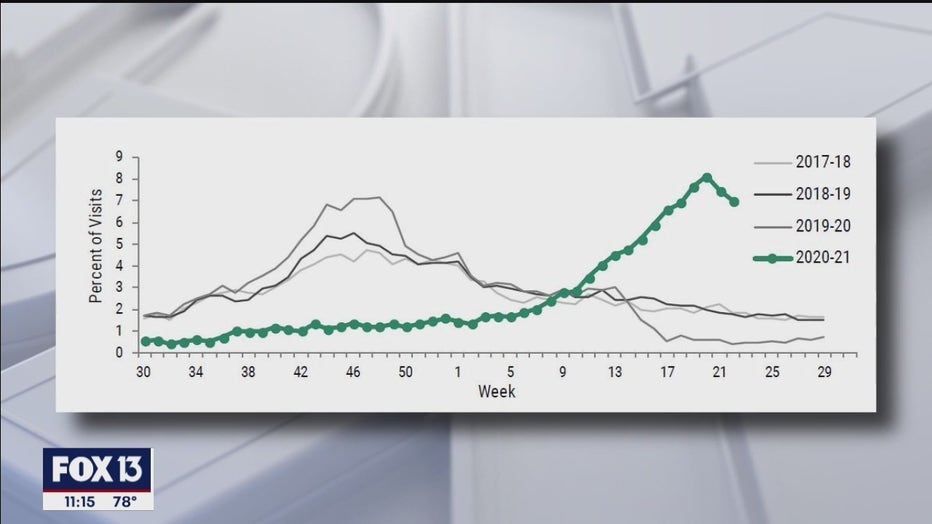 However, it is also possible the virus is less dangerous as it comes back, since it did not get the chance to mutate.

"The lack of genetic diversity of flu should lead to a milder flu season," explained Teng. "The truth is we don’t know what’s gonna happen."

Right now, Florida is seeing an out-of-season surge of RSV in children.  Little ones who were mainly home over the last year are now heading back to childcare or playgroups and being exposed.

"They’re the ones who probably haven’t seen the virus before so their immune system is completely naïve," Teng said.

Teng says parents need to be aware that a lack of immunity in infants and young children means a higher risk of infections and severe disease.

For everyone else, Teng says immunity to common illnesses should still be intact.

"For most of these pathogens, missing one season isn’t really gonna change your immune system," he said.