All seven locations across the state have officially closed down due to financial problems. Locked doors and a 'closed' sign now greets those stopping by.

LAKELAND, Fla. - The Wildwood Antique Mall in Lakeland has drawn in customers from all over the state for years, but it's sudden closure Wednesday night caught customers and vendors off guard.

"We have people from all over, it's a quick stop, it's easy to get into, and we have so many vendors with so much of a selection, we have something for everybody," said Jill Heinecke, a vendor at the mall.

All seven locations across the state have officially closed down due to financial problems. Locked doors and a 'closed' sign now greets those stopping by.

"It's a combination of anger, we're just kind of overwhelmed," said Karen Anderson, another vendor at Wildwood Antique Mall.

The company filed for Chapter 11 bankruptcy earlier this year. However, Wednesday, a judge ordered the company to shut down and liquidate in order to pay back it's debts. The only notice given to the Lakeland location's over 200 vendors was a brief email.

"It's saying they were closed indefinitely," said Heinecke. "So the next morning, early, I drove up just to see if it was true and found the two notes on the door." 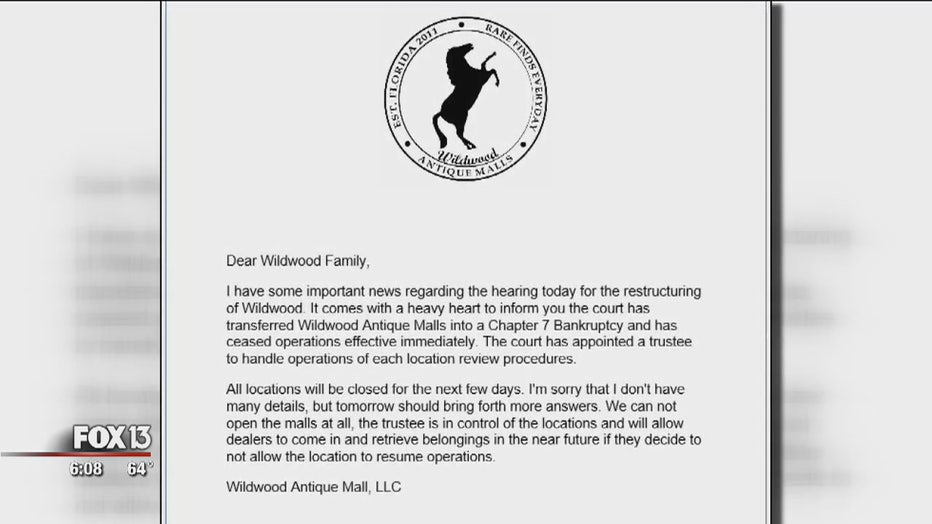 Friday, court-appointed locksmiths were at the mall to change out the locks. Over $100,000 of vendors' merchandise remains behind those locked doors. Currently, there is no timeframe for when vendors will get it back.

The problems don't stop there. Some vendors said they haven't been paid their commission for months and many are still waiting for thousands of dollars they said they're owed.

"We have a lot of older vendors and this is their livelihood," said Anderson. "They come in here and the money supplements what they might have, and they live off that."

With the future uncertain, vendors are concerned. Right now, all they can do is wait and hope.

FOX 13 reached out to the owner of the Wildwood Antique Mall and he acknowledged the company's financial hardships, but said vendors have no reason to be concerned. He said he is confident that all their merchandise will be returned.