LAKELAND, Fla. - For many, the pride flag symbolizes equality, but one Lakeland man says his mobile home park won’t allow it. He says management is now warning him that if he doesn't take his flag down, he could be evicted.

Jimmy Anderson and his husband say the flag brings them happiness and represents all that’s good. Neighbors said they feel the same and hope management will have a change of heart.

For Anderson, seeing the colors waving in the wind fills him with pride.

"It represents equality, and it shows love to everybody," Anderson said.

Sunday, he raised the flag on his flagpole outside his home to commemorate pride month. The next morning, management at the Sunshine Village mobile home park in Lakeland issued him a notice, telling him to take it down.

"However, he chooses to display it. That's fine. It's not harming anybody. We're not losing any sleep because of his flag," neighbor Melba Robinson said.

In the notice, park management writes, "only the American flag may be flown. All other flags are to be taken down." 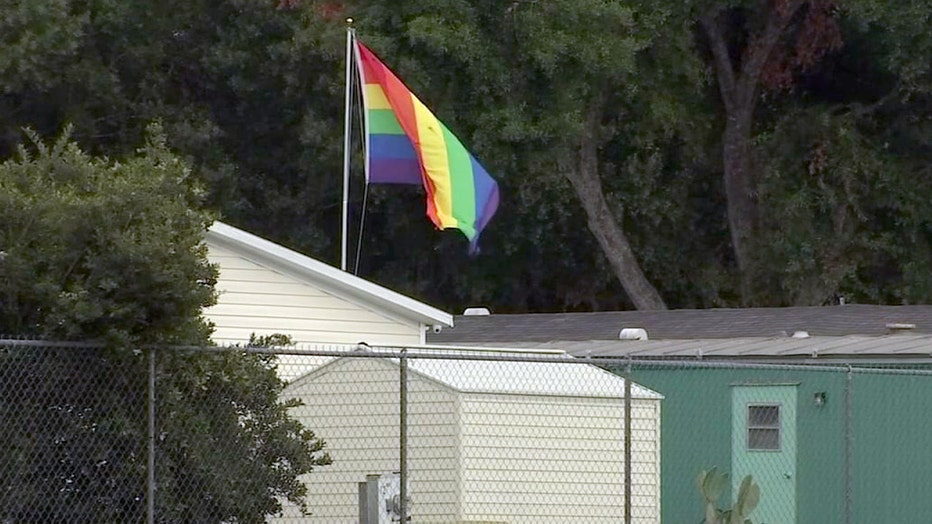 Jimmy Anderson and his husband say the flag brings them happiness and represents all that’s good.

FOX 13 found that Anderson wasn't the only resident flying a flag that wasn't an American flag, like a "Don't Tread on Me" flag being flown just a few doors down.

"The only thing they say is only the American flag can be flown, but in their rules and regulations they contradicted themselves," Anderson said.

Anderson is talking about the park's rules which state additional flags, including the state flag, military flags and the POW-MIA flag can be flown, which contradicts his notice.

Anderson's neighbor, Aleena Cummings, who has a pride flag in her window, feels Anderson is being unfairly targeted.

FOX 13 tried to get in touch with management and is still waiting to hear back. Anderson moved to Sunshine Village in April when he bought his home, but says now he's making plans to sell his house and move out.

Currently, he's consulting with attorneys to figure out his best option.

"Let my flag fly. There's nothing wrong with it," Anderon said.

Going forward, Anderson says he's hopeful Sunshine Village will be more inclusive and allow people to fly the flags they choose to.

FOX 13 placed calls and messages into Sunshine Village management and still waiting to hear back as of Monday night.