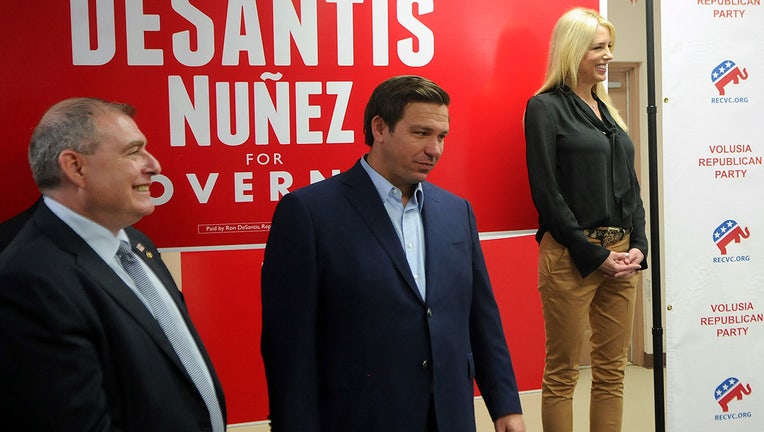 In this file photo, Rudy Giuliani associate Lev Parnas (left), who was indicted for violating campaign finance laws, is seen at a campaign rally for Florida Governor Ron DeSantis (center) on November 4, 2018 in South Daytona, Florida. Also pictured a

DeSantis, however, declined further discussion of post-election interactions with Lev Parnas, who, along with fellow businessman Igor Fruman, has been arrested on campaign-finance charges involving the pro-Trump super PAC America First Action.

The governor has become swept up in the case, in part because of pictures of Parnas at DeSantis fundraisers last year. After the campaign-finance charges emerged, DeSantis announced he was turning over to the federal government the $50,000 that Parnas and Fruman contributed to his political committee through a Delaware corporation called Global Energy Producers.

“This individual had no involvement in any policy or anything involving the administration,” DeSantis said of Parnas while addressing reporters after a Cabinet meeting. “In fact, one of the fundraisers in South Florida that worked on these fundraising events for us received a request from him to be on one of our transition committees for public safety. That request was denied.”

DeSantis did not name the fundraiser and, when asked if he met with Parnas after becoming governor, DeSantis replied, “I don’t have anything else to add.”

When DeSantis was getting ready to take office, he and Lt. Gov. Jeannette Nunez invited numerous supporters to serve on a public-safety advisory committee, which was asked to offer the new administration "strategic advice" on public-safety policies, according to internal transition records.

DeSantis' transition team also told members of the advisory committee that they were to “prepare a report for the administration" to help it in the transition, records obtained by The News Service of Florida show.

“Your support for the incoming administration and your assistance on these important policy issues will shape the future of Florida," the transition team wrote. "Each committee member brings unique experience and perspective to this process and your contribution will be valuable."

Among the people who joined the committee were Kent Stermon, a Jacksonville executive at Total Military Management who donated tens of thousands of dollars to DeSantis’ campaign.

Stermon was the chairman of that committee and has since been appointed by the governor to serve on the state university system’s Board of Governors.

Others who were invited to advise the governor on public-safety policy included Derrick Schofield, an executive with The GEO Group, Polk County Sheriff Grady Judd and Ryan Petty, Andrew Pollack and Max Schachter, three parents who lost children in the Marjory Stoneman Douglas High School shooting in February 2018.

Parnas and Fruman have drawn headlines as they are alleged to have helped President Donald Trump’s personal attorney, Rudy Giuliani, investigate political opponents of the president.

The Florida Democratic Party sent out a news release Tuesday saying that DeSantis “continues to dodge questions” about Parnas and Fruman.

"The trail of corruption is growing, and the walls are closing in on Ron DeSantis,” Florida Democratic Party Chairwoman Terrie Rizzo said in a prepared statement. “He can no longer deny his disturbing connection to these men who are accused of meddling in U.S. elections. Floridians deserve answers on what he knew about Lev Parnas and Igor Fruman when he took the money, and what was asked of him during their private conversations."

Photos and videos have emerged of Parnas with DeSantis at several campaign events in 2018.

The most recent shots to draw attention include a photo by Getty Images in which they appear off stage during a campaign event in South Daytona two days before the election.

Parnas joined DeSantis later in the day during an event in Boca Raton.

Last week, DeSantis said Parnas “was a guy who at RNC (Republican National Committee) functions, Trump Victory functions, he was at a lot of these things, was I think viewed as one of the top supporters of the president in Florida. And so, it was just like any other donor. Nothing more than that.”

The Miami Herald reported that Parnas hosted two fundraisers for DeSantis in 2018.

In the federal charges, a four-count indictment, filed in the Southern District of New York, contended Parnas and Fruman funneled money from a single Russian donor through Global Energy Producers to advance their financial interests and that of at least one Ukrainian government official.