TAMPA, Fla. - There was an emotional reunion outside Tampa General Hospital Thursday – but it almost never happened.

"Without those people, I wouldn’t be here, and I just wanted to say thank you," said Ricky Pearson.

He spent more than 100 days at TGH battling the delta variant of COVID-19, including nearly five weeks in intensive care.

He was diagnosed last August. The virus attacked his body so badly, at one point he was dead for several minutes until doctors could bring him back to life.

"From being healthy to not being able to feed yourself, that was the hardest part," Pearson said. 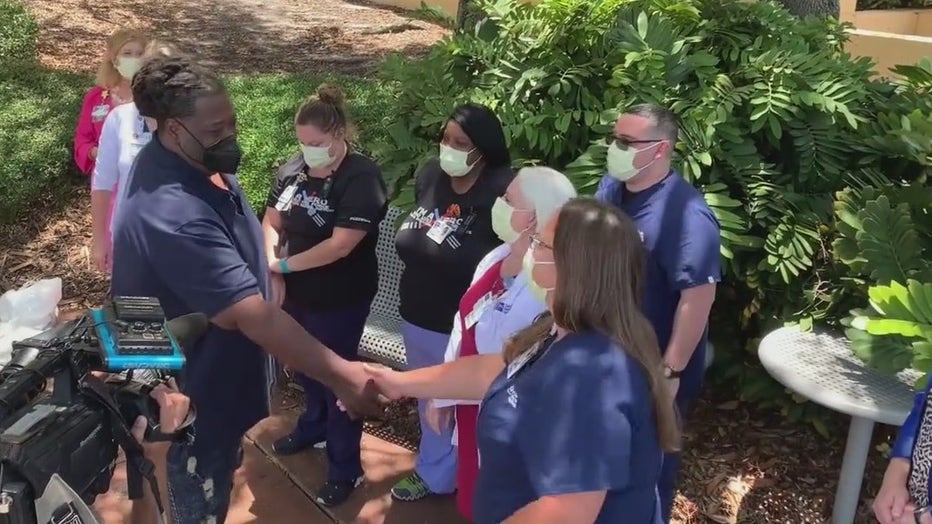 "We've been married 27 years, we’ve never been apart more than a day, every day it was very hard," said Pearson’s wife, Melissa Joplin.

Every day was a battle, but not giving up became the only constant.

"Our family wouldn’t have its backbone if my husband wasn’t here," Joplin said.

The "thank-yous"outside the specialized COVID unit went both ways.

"It really puts it in perspective. When we were at the height of our surge, we felt like every day was a losing battle," said nurse manager Kimberly Havers.

Pearson and his wife were not vaccinated when he got sick. They have since gotten the vaccines and are encouraging others to do the same.