In honor of National Nurses Day, FOX put together a tribute to nurses using clips of the hit show The Resident.

The era of clapping for health care workers every evening quietly subsided last year as the COVID-19 pandemic raged on, but Thursday marks another occasion to celebrate nurses.

May 6 is National Nurses Day, which marks the beginning of National Nurses Week. It’s a period Congress designated in 1982 to recognize and appreciate the work nurses do every day to save lives.

But the day’s origin can be traced back well before then.

National Nurses Week ends on May 12, which was chosen to commemorate the birthday of Florence Nightingale — a celebrated English nurse who rose to prominence while treating soldiers in the Crimean War. 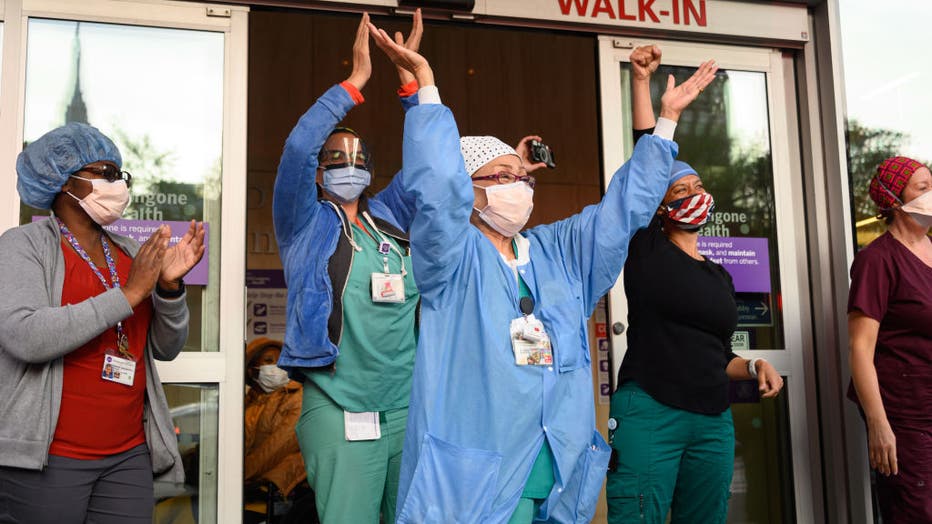 Medical workers stand outside NYU Langone Health hospital as people applaud to show their gratitude to medical staff and essential workers during the coronavirus pandemic on May 19, 2020. in New York City. (Photo by Noam Galai/Getty Images)

According to National Day Calendar, the troops affectionately dubbed her "The Lady with the Lamp," but history remembers her as the founder of modern nursing.

In 1953, Dorothy Sutherland, who worked at the Department of Health, penned a letter to President Dwight Eisenhower calling for a National Nurses Day. Ike never made the proclamation, but that didn’t stop people from celebrating on their
own the next year in October.

In 1990, the American Nurses Association expanded the celebration to May 6-12, then made these dates permanent three years later.

Whether it’s the nurse in your doctor’s office, a friend or a relative, the National Day Calendar said this week is the perfect time to celebrate the nurses in your life.

RELATED: Tired, but determined: Nurses push through emotionally draining side of COVID-19 care

And according to a study by the Ohio State University, a little appreciation might be more timely than you realize. Sixty percent of nurses reported poor physical health and 50% reported poor emotional health.

The last year has presented unique challenges to health care workers, which often left them isolated from loved ones.

Many nurses have been unable to hug their spouses or children out of fear of infecting them with the virus. And they’ve even gone as far as sleeping in separate rooms.