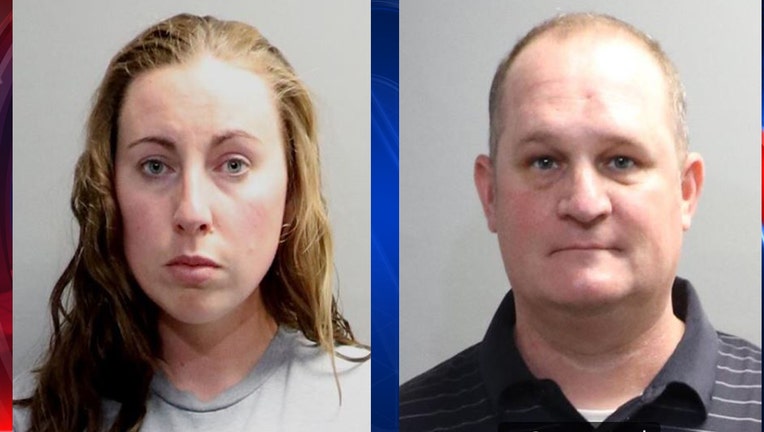 ORION TWP, Mich. (FOX 2) - Oakland University said it has fired the man seen in social media videos this week where his wife pulled a gun on a mom and her daughter following an argument outside a Chipotle in Orion Township.

The university announced it fired Eric Wuestenberg after he was charged with felonious assault on Thursday.

Wuestenberg was the Coordinator of Veterans Support Services, according to his LinkedIn page, but Oakland University said, after seeing the video, the behavior was not acceptable.

"We have seen the video and we deem his behavior unacceptable. The employee has been notified that his employment has been terminated by the university," OU said in a statement.

A heated exchange involving a white woman pulling a gun on a black mom and her daughter at a Lake Orion restaurant was posted to Twitter late Wednesday night.

Wuestenberg, 42, and his wife, Jillian, were both charged on Thursday in Oakland County with felonious assault after an argument spun wildly out of control Wednesday evening.

The Wuestenbergs were at Chipotle when they got into an argument with a mother and her daughter outside the restaurant. According to the Oakland County Sheriff, the two groups got into a heated exchange when Jillian Wuestenberg bumped into the mom's daughter as they were entering the restaurant.

"Apparently, what had happened - (there) was one common theme between both (stories) - the 3 headed inside Chipotle and one woman headed out with her food, there was a bump as they entered and exit," he said.

Bouchard said someone felt they needed an apology and "it escalated from there". He said it was unclear who the aggressors were.

Sheriff Michael Bouchard said an argument is believed to have started after two people bumped into each other while one was walking out of a Chipotle.

"This ignorant woman bumped into a 15-year-old and you're on camera and you're feeling threatened," said the person holding the second camera.

The woman responds "you're blocking me from getting into my car."

In social media videos, explicit language was used by both parties towards each other. Jillian Wuestenberg gets into a minivan and Eric is on the sidewalk, talking to the other women when he steps in the direction of one of them. They challenge him to "do something" and he responds with "who the f**k do you think you guys are?"

He argues with them and says she didn't do anything but the women are adamant she bumped into them and then call them both "racist and ignorant".

A slight lull in the shouting commences as the car reverses. As one of the women walks behind the vehicle, it starts backing up, prompting her to shout "You going to f*ckning hit me?" and slaps the vehicle multiple times.

The vehicle stops and that's when the woman exits, seen readying her firearm.

"Get the f*ck away from me!" shouts the white woman as she exits the vehicle.

Bouchard said both Wuestenbergs were holding loaded guns and both had legal Concealed Pistol Licenses (CPLs) when police arrived.