ZEPHYRHILLS, Fla. - An off-duty Plant City police officer is being hailed as a hero after he helped firefighters rescue two children from their burning Zephyrhills home.

Pasco County Fire Rescue said the fire broke out in the home on Doe Path Court around 8:30 p.m. Wednesday.

Off-duty Plant City Police Officer Michal Pietrusinski, who lives in the Zephyrhills area, was out for an evening walk when he noticed smoke coming from his neighbor's home.

Moments later, he heard the screams of a frantic mother running toward the house with her daughter, who has autism. Pietrusinski said he knew the mother also had two other children, two boys who also have autism and are non-verbal, who were possibly trapped in the house.

"I saw mom coming running towards the house with her third child. So automatically, I thought, where are the boys? Because I’m familiar with the family," he said.

Pietrusinski and his fiancée, Sharon Navarro, grabbed a garden hose and ran to the front door of the home. Upon entering the house, the couple encountered thick smoke, forcing them to crawl on the floor to avoid being overcome by smoke inhalation.

RELATED: From burn survivor to ‘superdog’: Taka’s journey inspires patients near and far

While inside the living room, Pietrusinski began spraying water on a couch that was fully engulfed in flames, while calling out to the boys, "If you can hear me, come towards my voice."

He then grabbed a T-shirt, soaked it in water, and placed it over his mouth to help him breathe as he began searching each room in the house for the children. 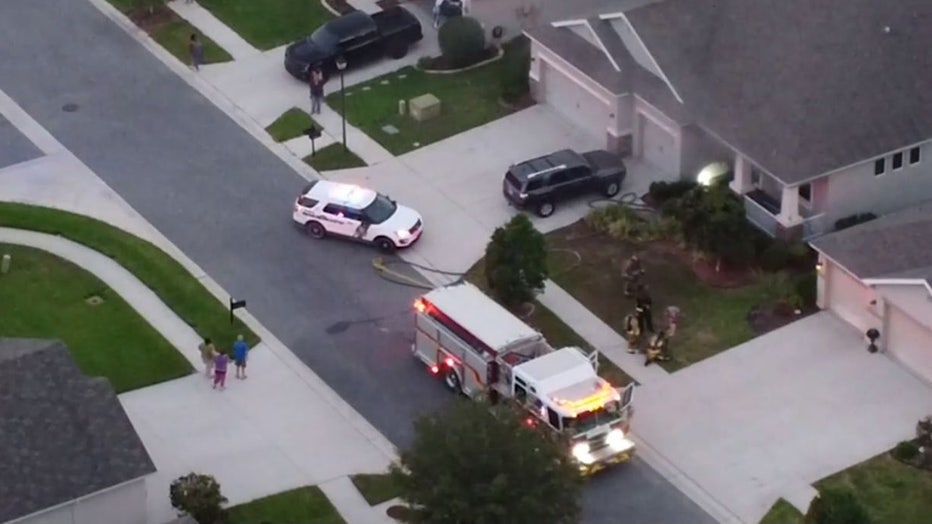 Pietrusinski eventually managed to spot one of the boys standing among the smoke, and quickly brought him outside to safety.

With the fire growing rapidly, Pietrusinski asked the mother if she had any idea where the third child could be in the house. He then ran back inside and tried to extinguish more of the flames as Pasco County Fire Rescue arrived.

Firefighters took over the search for the missing boy. Captain Craig Harris, firefighter Timothy McCormick, and probationary firefighter Joshua Casal located the child in a bathroom shower with the water running amid dense smoke.

The boy was conscious and breathing as they pulled him from the home, but firefighters had him transported to the hospital with a medical helicopter in an abundance of caution due to his smoke inhalation.

Pietrusinski was also taken to the hospital for evaluation due to smoke inhalation. Both he and the boy have since been released, officials said.

Fire rescue officials said two of the first responders are brand new to their jobs. It was Casal's fifth shift as a firefighter, and Pietrusinski had just been sworn in as an officer in Plant City in early June as part of the agency's new officer sponsorship program.

"I'm glad that I could help, and I would do it again," Pietrusinski said.

Pietrusinski is a Polish immigrant who served seven and a half years in the U.S. Navy and four years as a search and rescue swimmer.