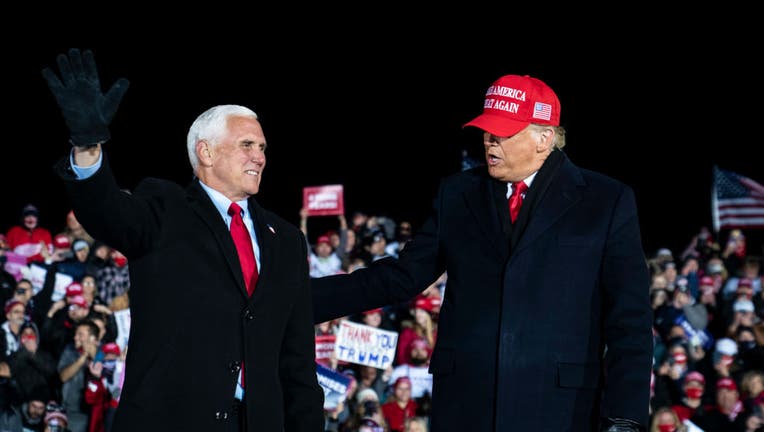 Vice President Mike Pence on Monday rallied his staff, saying the 2020 presidential race “ain’t over,” as the Trump campaign mounts legal battles in a number of key battleground states where President-elect Joe Biden is leading.

“Told @VP Team Today, “it ain’t over til it’s over..and this AIN’T over!” Pence tweeted Monday from his Twitter account. “@realDonaldTrump has never stopped fighting for us and we’re gonna Keep Fighting until every LEGAL vote is counted!”

Pence, on Monday, held a meeting in the ceremonial office in the Eisenhower Executive Office Building, next door to the White House. According to an administration official who was in the room, the vice president walked in to a standing ovation.

“He still is in this fight,” Stepien said, according to multiple people who were in the room. “There is a process.”

According to people in the room, Stepien thanked the Trump campaign staff for continuing to do their jobs, and gave them an update on legal challenges and recounts in key states.

The Trump campaign has filed lawsuits in states like Arizona, Nevada, Pennsylvania and Georgia.

The Fox News Decision Desk called the race for Biden on Saturday after results in Pennsylvania and Nevada put him above the 270 electoral vote threshold necessary to clinch victory in the Electoral College.

Biden and Vice President-elect Kamala Harris have attempted to calm the public, insisting that all votes will be counted no matter how long it takes.

"It's time for America to unite. And to heal," Biden said in a statement after his win was declared.

Despite the ongoing legal battles, sources close to Trump told Fox News he plans to graciously concede and commit to a peaceful transfer of power, if the campaign's legal challenges fail to open up a path for a second term.