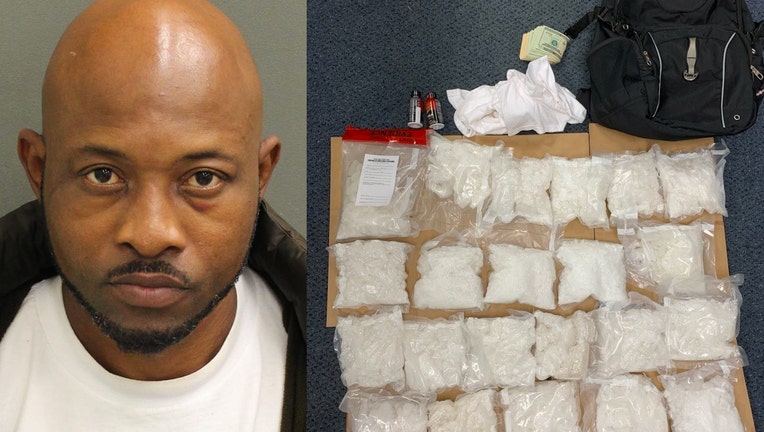 Photos from the Orlando Police Department

ORLANDO, Fla. - A man was arrested during a layover at the Orlando International Airport because he had over 22 pounds of crystal meth in his bag, valued at more than half a million dollars, police said.

The Orlando Police Department said that on Friday, 46-year-old Eli Priestly Brown was stopped by a TSA agent for a random bag check while waiting for his flight. They found several clear bags with a crystal-like substance wrapped in clothing.

They said that police then met with Brown, who said he flew in from Los Angeles, California, and was going to Louisville, Kentucky.

Apparently, Brown had 22 vacuum-sealed bags inside his backpack, which amounted to 22.2 pounds of crystal meth, valued at more than half a million dollars. $900 in cash was also recovered.

Brown was said to have been charged with Trafficking in Methamphetamine over 200 grams and is being held at the Orange County Jail on a $500,000 bond.

The Orlando Police Department said that this is one the largest amounts of illegal drugs being carried by one person in the department's recent history.