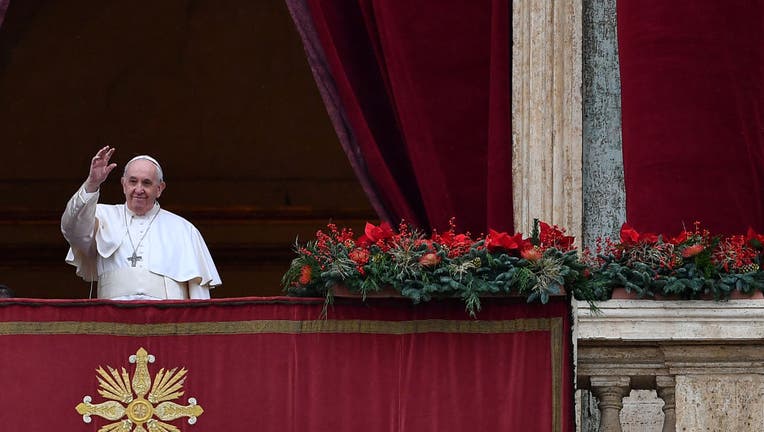 Vatican City, VATICAN, DECEMBER 25: Pope Francis delivers the Urbi et Orbi (Latin for 'to the city and to the world' ) Christmas message from the central loggia of St. Peter's Basilica at the Vatican, December 25, 2021. (Photo by Isabella Bonotto/Ana

ROME (AP) - Pope Francis prayed Saturday for an end to the coronavirus pandemic, using his Christmas Day address to urge health care for all, vaccines for the poor and for dialogue to prevail in resolving the world’s conflicts.

Amid a record-setting rise in COVID-19 cases in Italy this week, only a few thousand people flocked to a rain-soaked St. Peter’s Square for Francis’ annual "Urbi et Orbi" ("To the city and the world") Christmas address. Normally, the square would be packed with tens of thousands of holiday well-wishers.

At least they could gather this year. Italy’s 2020 holiday lockdown forced Francis to deliver a televised address from inside the Apostolic Palace to prevent crowds from forming in the square. Although Italy this week counted more than 50,000 cases in a single day for the first time, the government has not ordered another lockdown.

The pope's Christmas Day speech gives him an opportunity to draw a global audience's attention to conflicts big and small. This year was no different. Francis lamented ongoing conflicts in Syria, Yemen and Iraq, newly flaring tensions in Ukraine and Ethiopia, and an "unprecedented crisis" in Lebanon.

"We have become so used to them (conflicts) that immense tragedies are now being passed over in silence; we risk not hearing the cry of pain and distress of so many of our brothers and sisters," he said from the loggia of St. Peter's Basilica as Swiss Guards stood at attention in the square below.

Francis warned of the pandemic tendency to withdraw and isolate, urging instead dialogue to try to resolve the world conflicts. He prayed in particular for those most affected by the virus, including women and children who have suffered increased abuse during lockdowns.

"Son of God, comfort the victims of violence against women, which has increased in this time of pandemic. Offer hope to young children and adolescents suffering from bullying and abuse," he said.

He prayed for "consolation and warmth" for older adults who are alone, as well as for health care workers who "generously devote themselves" to caring for the sick.

"Grant health to the infirm and inspire all men and women of good will to seek the best ways possible to overcome the current health crisis and its effects," he said. "Open hearts to ensure that necessary medical care – and vaccines in particular – are provided to those peoples who need them most."

Francis delivered his speech hours after celebrating a "Midnight Mass" service for some 2,000 people, a fraction of the basilica's capacity. The service actually began at 7:30 p.m., a nod to the 85-year-old pope’s endurance and a hold-over from last year, when the service had to end before Italy’s nationwide COVID-19 curfew.

For the second day in a row, Italy on Friday set a daily pandemic record with 50,599 new cases. Another 141 people died, bringing Italy’s official death toll in the pandemic to 136,386.

With the arrival of the omicron variant in Italy, the Vatican secretary of state this week imposed a new vaccine mandate on Vatican staff, extending it to all employees except those who have recovered from COVID-19.

Previously, only employees who dealt with the public directly had to be vaccinated, such as the staff of the Vatican Museums and the Swiss Guards. Other Vatican employees could access their offices with regular testing. Now, there is no test-out exemption.