SARASOTA, Fla. - Just before noon, as temperatures rose above 90 degrees, Sergeant Louis Buck responded to frantic calls. Callers said a dog was locked in a car with no running air conditioning.

"You could tell the dog was getting really hot, trying to find shadowy places inside the car to hide," recalled Sgt. Buck.

Buck and Officer Matthew Grochowski with the Sarasota Police Department tried finding the owner. The car was a rental and parked outside the Sleep Inn near University Parkway.

The driver was nowhere to be found.

"Touching the car and touching the windows were very hot," said Buck.

"I knew it was down underneath the steering wheel trying to get into some shade, trying to distract him and get his attention away from what was going to happen," said Buck.

"When he told me it was OK to do it, we broke the window to get some air flowing through there," Grochowski said.

With three hits on the window, the dog finally had a breath of fresh air and some water waiting on him.

Inside the car, Sarasota County Animal Services recorded the temperature.

"It was up to 115 in the vehicle when she did the reading," said Grochowski.

WATCH: Cat jumps from burning building in Chicago – and survives 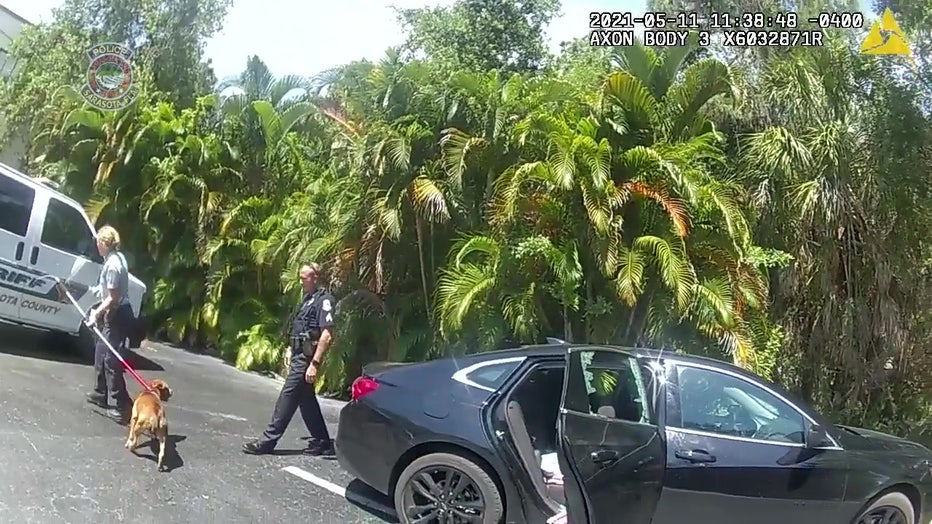 The dog's owner told Officer Grochowski he left the car running. He said he must have walked away too far with the key fob and the car shut off.

Animal Services issued the owner two citations and gave him back his dog.

If the dog hadn't have been spotted and time slipped by, the ending could have been much different.

"It feels good to know that you kind of helped him out," said Buck.

"I think it shows people in the community that they need to be aware of what’s going on and let us know so we can help these situations out, so we can even save an animal’s life," he added.