Kirk Plante has turned the back of his pickup into a billboard, in hopes of finding his wife a kidney.

ORANGE CITY, Fla. - Kirk Plante has turned the back of his pickup into a billboard, in hopes of finding his wife a kidney.

The back reads, "In desperate need of a kidney transplant," and gives Plante's phone number.  The kidney is for his wife, Stacie.

"Well, I was admitted to the hospital last December with kidney failure. I had a biopsy in January and told my kidneys were shot," she says.

Stacie, who has type-2 diabetes, says she's on dialysis ten hours a day.

"Right now, I don't get to do a lot because I get out of energy so easy. Even going to the grocery store is very hard."

She's on a transplant list but has no idea when a kidney might come available. Kirk decided to post it on his pickup to see if anyone can help, but so far no luck. 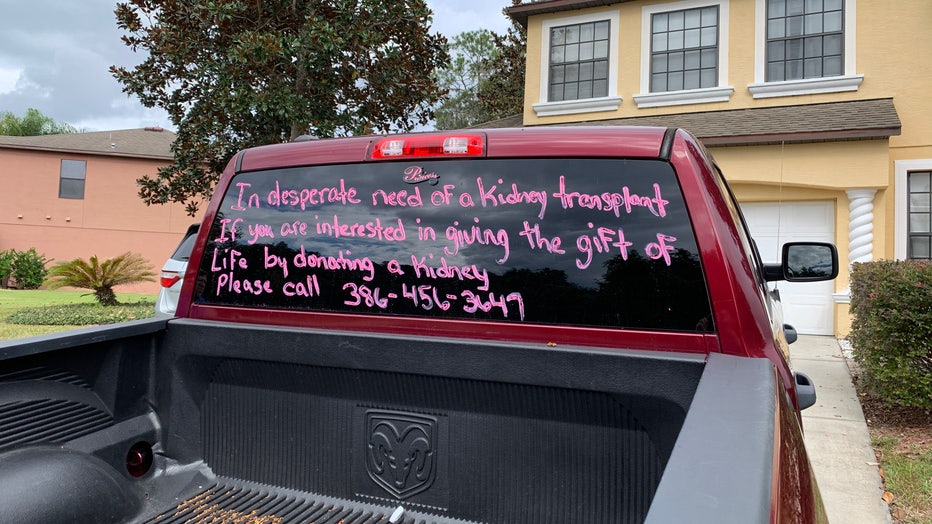 "We've had a few people stop us and ask what her blood type is, in traffic."

Since Kirk's kidneys aren't a match for his wife, he says he's prepared to donate one of his kidneys in what's called a "paired exchange."  That's when the couple connects with a matching couple also searching for a kidney. Then the two eligible donors each give a kidney to the two patients who need them.

"So I'm helping somebody and they're helping her," Kirk says, "so an exchange program, basically."