EXPLAINED: Who was Sidney Poitier?

Sidney Poitier, a Bahamian-American actor who became the first Black man to win the Academy Award for Best Actor and someone who transformed how Black people were portrayed on screen, has died. He was 94.

News of the legendary actor and filmmaker’s death was confirmed to FOX News by the Bahamas Foreign Affairs' office, which said Portier died Thursday in the country.

Poitier, who was born in Miami and raised in the Bahamas, was the son of tomato farmers before launching a career that went from small, hard-won theater parts to eventual Hollywood stardom. He became known for some of the first popular film roles to seriously explore the lives of Black Americans.

Before Poitier, no Black actor had a sustained career as a lead performer or could get a film produced based on his own star power. Before Poitier, few Black actors were permitted a break from the stereotypes of bug-eyed servants and grinning entertainers. Before Poitier, Hollywood filmmakers rarely even attempted to tell a Black person’s story.

Poitier’s rise to fame mirrored profound changes in the U.S. throughout the 1950s and 1960s. As racial attitudes evolved during the civil rights era and segregation laws were challenged and fell, Poitier was the performer to whom a cautious industry turned for stories of progress. 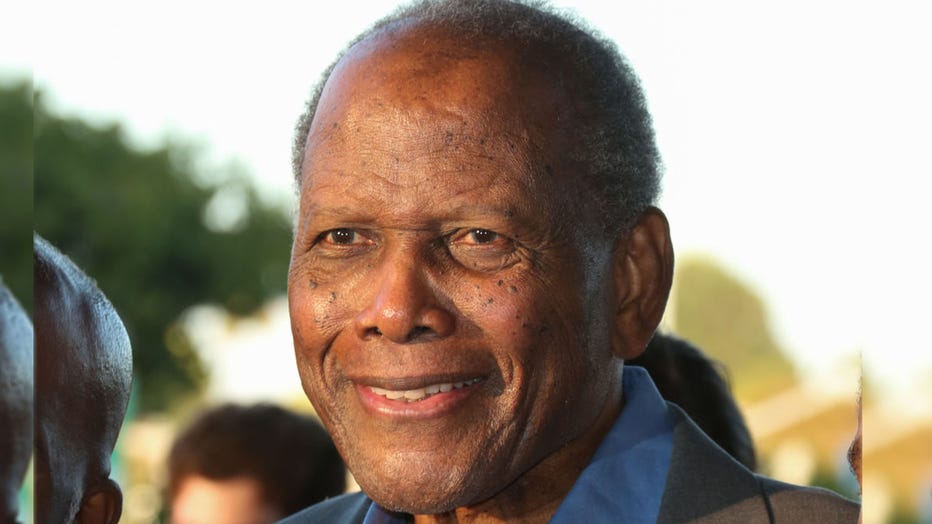 FILE - Actor Sidney Poitier attends the opening night of "Born For This" at The Broad Stage on July 20, 2017, in Santa Monica, California. (Photo by Paul Archuleta/FilmMagic)

Poitier received acclaim for several films throughout his career, including "Porgy and Bess," "A Patch of Blue" and "A Raisin in the Sun," a story told both on stage and on the screen in which Poitier played an ambitious young father whose dreams clashed with those of other family members. Other films included "Blackboard Jungle," "To Sir, With Love," and "In the Heat of the Night."

In 1964, he became the first Black man and the first Bahamian to win the Oscar for Best Actor for his portrayal of Homer Smith in "Lilies in the Field," in which a traveling handyman (Poitier) stops at a farm in the desert to get water for his car and meets a group of nuns who wish to build a chapel. He was later presented with an Honorary Award by the Academy of Motion Picture Arts and Sciences in 2001.

WATCH: Sidney Poitier’s Oscar-winning turn in "Lilies of the Field"

"Because it is a long journey to this moment, I am naturally indebted to countless numbers of people," Poitier said in his 1964 Oscar acceptance speech, grinning ear to ear as the crowd wildly applauded.

He also starred in "Guess Who’s Coming to Dinner,″ a landmark 1967 film that was the first mainstream movie to support interracial marriage. That same year, theater owners named Poitier the No. 1 star of 1967 — the first time a Black actor topped the list.

"I chose to play only those parts that would reflect how I viewed myself and how I viewed my country,″ Poitier told the Associated Press in 1995. He also credited his groundbreaking roles to directors and producers who risked their careers to make such pictures at a time of social upheaval.

Poitier also went on to direct several films with largely Black casts, including "A Piece of the Action" and "Uptown Saturday Night."

In 1995, he became a Kennedy Center honoree and later received the Medal of Freedom, the nation’s "highest civilian honor," from former President Barack Obama in 2009. The White House at the time noted his work as a "groundbreaking actor, becoming the top Black movie star in the 1950s and 1960s."

"Poitier insisted that the film crew on The Lost Man be at least 50 percent African American, and starred in the first mainstream movies portraying ‘acceptable’ interracial marriages and interracial kissing," the Obama White House said in the 2009 statement. 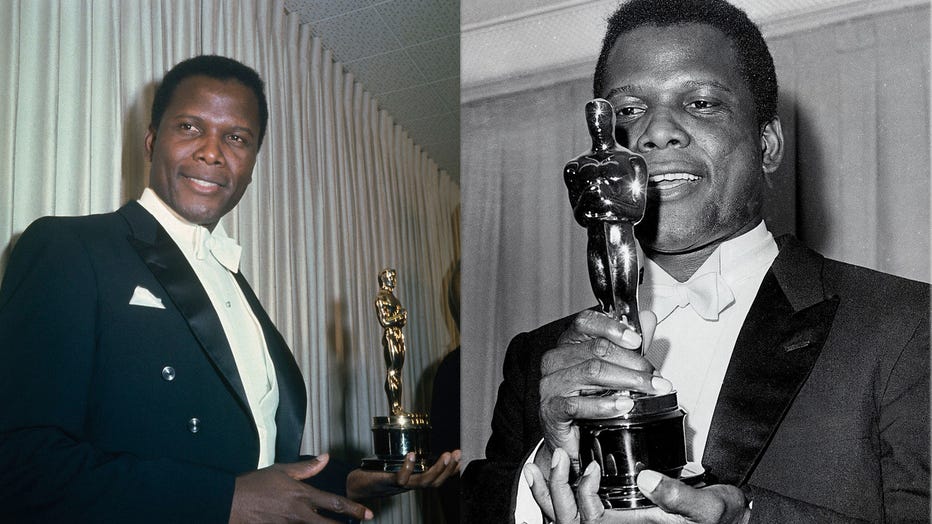 FILE IMAGES - Bahamian American actor Sidney Poitier is pictured in various shots holding his Academy Award for Best Actor in a Leading Role for 'Lilies Of The Field', directed by Ralph Nelson, at the 36th Academy Awards ceremony, on April 13, 1964.

But stardom didn’t shield Poitier from racism and condescension. He had a hard time finding housing in Los Angeles and was followed by the Ku Klux Klan when he visited Mississippi in 1964, not long after three civil rights workers had been murdered there. In interviews, journalists often ignored his work and asked him instead about race and current events.

"I am an artist, man, American, contemporary," he snapped during a 1967 press conference. "I am an awful lot of things, so I wish you would pay me the respect due."

WATCH: "A Century of Black Cinema"

Poitier was not as engaged politically as his friend and contemporary Harry Belafonte, leading to occasional conflicts between them. But he participated in the 1963 March on Washington and other civil rights events, and as an actor defended himself and risked his career. He refused to sign loyalty oaths during the 1950s when Hollywood was barring suspected Communists and turned down roles he found offensive.

In the 1980s and ’90s, he appeared in the feature films "Sneakers" and "The Jackal" and several television movies, receiving an Emmy and Golden Globe nomination as future Supreme Court Justice Thurgood Marshall in "Separate But Equal" and an Emmy nomination for his portrayal of Nelson Mandela in "Mandela and De Klerk." Theatergoers were reminded of the actor through an acclaimed play that featured him in name only: John Guare’s "Six Degrees of Separation," about a con artist claiming to be Poitier’s son.

In recent years, a new generation learned of him through Oprah Winfrey, who chose his 2000 memoir "The Measure of a Man" for her book club. Meanwhile, he welcomed the rise of such Black stars as Denzel Washington, Will Smith and Danny Glover: "It’s like the cavalry coming to relieve the troops! You have no idea how pleased I am," he said.

Poitier had four daughters with his first wife, Juanita Hardy, and two with his second wife, actress Joanna Shimkus, who starred with him in his 1969 film "The Lost Man." Daughter Sydney Tamaii Poitier appeared on such television series as "Veronica Mars" and "Mr. Knight."

Arizona State University’s new film school, The Sidney Poitier New American Film School, was named after him in early 2021. The university did not make Poitier, who had remained out of the public eye for some time, available for an interview.  But his daughter Beverly Poitier-Henderson told The Associated Press at the time that her father was "doing well and enjoying his family," and considered it an honor to be the namesake of the new film school.

Lilies of the Field (1963): The great Sidney Poitier made history when he won a well-deserved Oscar for this comedic drama, an adaptation of William Edmund Barrett’s 1962 novel "The Lilies of the Field." When Homer (Poitier), an itinerant worker with long-dormant dreams of becoming an architect, sees a group of German nuns attempting to build a fence on a ramshackle Arizona farm, he probably didn’t expect to wind up taking on a massive construction project — but thanks to the intrepid Mother Maria (Lilia Skala), he’s persuaded to stay and help with a number of small jobs, then some medium-sized jobs, and then a whole church-sized job. It’s a charming film anchored by Poitier’s warm presence and thoughtful performance, a turn that will appeal to believers and non-believers alike.