A cold front has brought subzero temperatures and snow to parts of Greece, including the Aegean islands. This footage shows the frigid conditions in the Santorini village of Imerovigli. (On the Rocks Santorini via Storyful)

ATHENS, Greece - Heavy snowfall disrupted air traffic Monday in the Greek capital of Athens and neighboring Turkey’s largest city of Istanbul, while several Aegean islands and much of Turkey were blanketed by snow.

The storm, named Elpida, or "hope" in Greece, snarled traffic in both Athens and Istanbul, a metropolis of 16 million people.

Flights in and out of Istanbul Airport were suspended until 4 a.m. Tuesday (0100 GMT) while authorities worked to clear runways as well as a road leading to the airport. Meanwhile, public offices closed early to ease rush-hour congestion.

Flurries were forecast to continue over the next few days in Istanbul. Istanbul’s Disaster Coordination Center AKOM says an Icelandic low-pressure system is behind the cold front and precipitation.

In Greece, authorities warned the public to limit outdoor movements to only essential ones on Monday and Tuesday, while schools in many areas were closed. Government spokesman Giannis Oikonomou said more than 46,000 school classes across the country were being held online.

The snow was coming down thick and fast throughout the day in central Athens, settling on the marble columns of the ancient Acropolis. Authorities sent out emergency alerts to cell phones in the wider Athens area warning of severe snowfall. 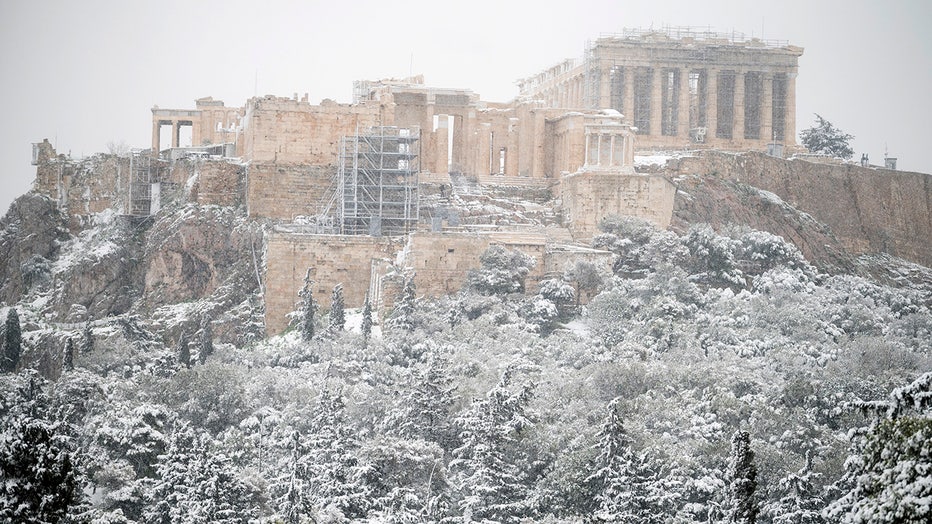 24 January 2022, Greece, Athen: Snow is on trees standing in front of the hill with the Acropolis. The Parthenon (temple) is scaffolded with scaffolding. Heavy snowfall caused problems on Monday, especially in central and southern Greece. In many reg

Snow chains were mandatory for cars on many roads, while trucks were banned from the main highway heading north from Athens. Nevertheless, the icy conditions and lack of snow chains on some vehicles left traffic snarled for hours on many of the Greek capital’s roads, including a highway ring road and one of the main avenues in Athens.

Several domestic and international flights to Athens airport were cancelled, while subway service to the airport was partially suspended as some of it runs above ground.

The health ministry announced that COVID-19 vaccination centers in the wider Athens region of Attica and on the nearby island of Evia would close at 3 p.m. Monday and would remain closed on Tuesday because of the heavy snowfall.

Oikonomou said weather conditions would continue to be "difficult" on Tuesday. Civil protection authorities have set up coordination centers with the fire department, police, the armed forces and local authorities to tackle any problems, he said. 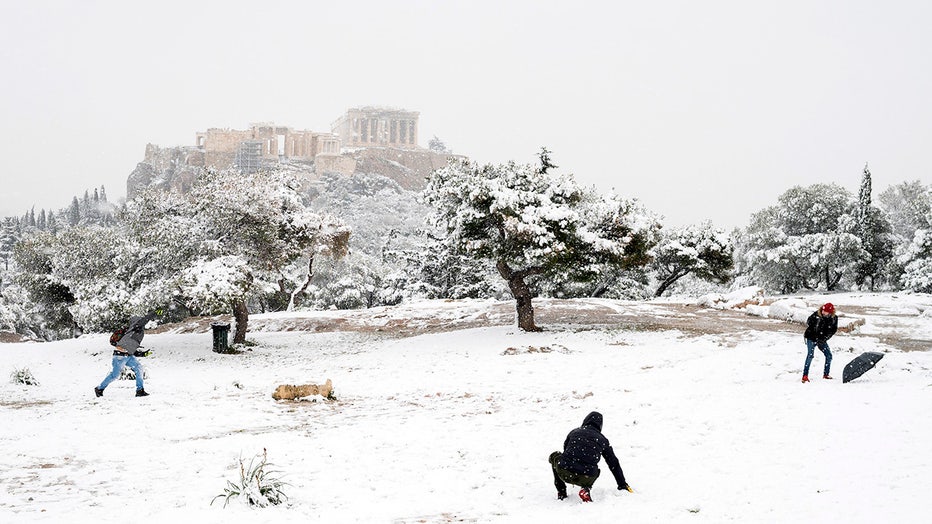 People play in the snow in front of the hill with the Acropolis during snowfall. (Photo by Angelos Tzortzinis/picture alliance via Getty Images)

Snow is common in the Greek mountains and in northern Greece but is less frequent in central Athens and on Aegean islands. Last year, the Greek capital was hit by a major snowstorm that caused severe problems, knocking out power for days in certain neighborhoods and making all streets impassable without snow chains. Thousands of trees collapsed from the weight of the snow and ice.

To the north in neighboring Albania on Monday, all elementary and high schools closed for three days because of cold weather. Authorities advised people to avoid driving. Temperatures reached -17 C (about 1 F) in eastern Albania, isolating some areas and causing problems for the electricity and water supplies. Many rural roads have been blocked.