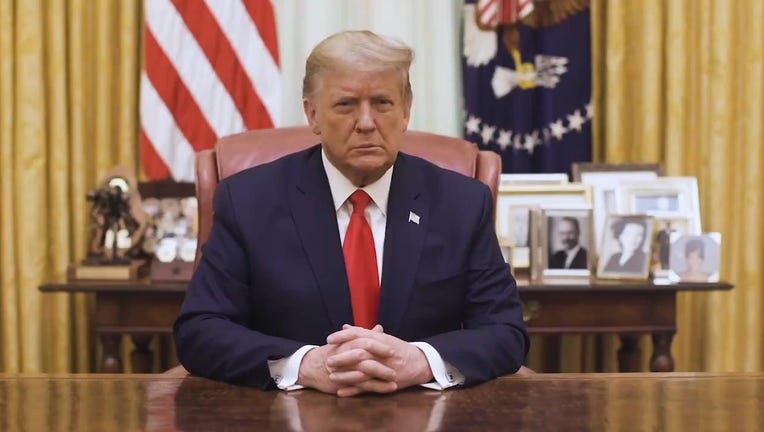 President Donald Trump is pictured in a video shared to the White House Twitter account on Jan. 13, 2021, shortly after being impeached by the U.S. House for the second time in the wake of the deadly Capitol riot. (Photo credit: White House)

WASHINGTON - The Supreme Court on Monday brought an end to lawsuits over whether Donald Trump illegally profited off his presidency, saying the cases are moot now that Trump is no longer in office.

The high court's action was the first in an expected steady stream of orders and rulings on pending lawsuits involving Trump now that his presidency has ended. Some orders may result in dismissals of cases since Trump is no longer president. In other cases, proceedings that had been delayed because Trump was in the White House could resume and their pace even quicken.

The justices threw out Trump’s challenge to lower court rulings that had allowed lawsuits to go forward alleging that he violated the Constitution’s emoluments clause by accepting payments from foreign and domestic officials who stay at the Trump International Hotel and patronize other businesses owned by the former president and his family.

The high court also ordered the lower court rulings thrown out as well and directed appeals courts in New York and Richmond, Virginia, to dismiss the suits as moot now that Trump is no longer in office.

Trump departs White House as his term comes to an end

President Donald Trump departed the White House for the final time Wednesday morning, hours before his term came to an end.

The outcome leaves no appellate court opinions on the books in an area of the law that has been rarely explored in U.S. history.

The cases involved suits filed by Maryland and the District of Columbia, and high-end restaurants and hotels in New York and Washington, D.C., that "found themselves in the unenviable position of having to compete with businesses owned by the President of the United States."

The suits sought financial records showing how much state and foreign governments have paid the Trump Organization to stay and eat at Trump-owned properties.

The cases never reached the point where any records had to be turned over. But Karl Racine and Brian Frosh, the attorneys general of Washington, D.C., and Maryland, respectively, said in a joint statement that a ruling by a federal judge in Maryland that went against Trump "will serve as precedent that will help stop anyone else from using the presidency or other federal office for personal financial gain the way that President Trump has over the past four years."

Other cases involving Trump remain before the Supreme Court, or in lower courts.

RELATED: 'Just move on': Republicans grapple with future after Trump

Trump is trying to block the Manhattan district attorney’s enforcement of a subpoena for his tax returns, part of a criminal investigation into the president and his businesses. Lower courts are weighing congressional subpoenas for Trump’s financial records. And the justices also have before them Trump’s appeal of a decision forbidding him from blocking critics on his Twitter account. Like the emoluments cases, Trump’s appeal would seem to be moot now that he is out of office and also had his Twitter account suspended.