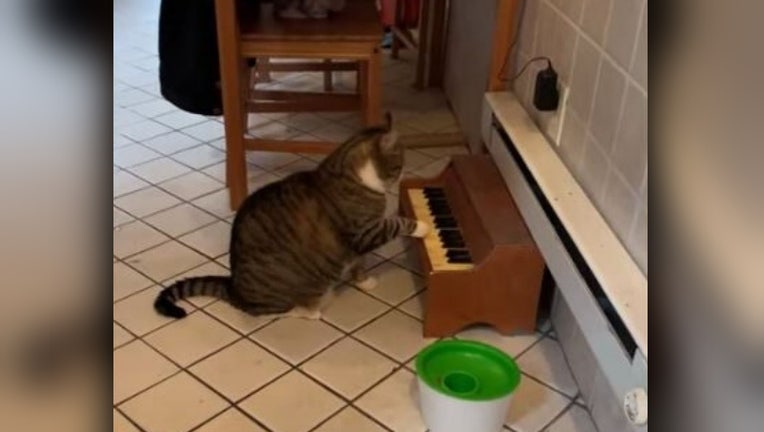 A musically-inclined tabby cat named Wilson plays a miniature piano next to his food dish to let his owners know it's time for dinner. (SWNS)

This cat’s got talent.

A musically-inclined feline was recorded playing his sad hunger song for his owner, Kate Nyx.

In the video, which was shared by SWNS, Nyx’s 7-year-old tabby cat, Winslow, is seen pressing some keys of his miniature piano to get her attention. Nyx then asks Winslow “Time for dinner?”

To which Winslow, of course, responds with what appears to be an affirmative-sounding “meow.”

Though, unfortunately, Winslow’s plot to get fed is foiled by Nyx.

“When is dinner time?” she is heard asking over a meowing Winslow. “It’s not now.”

Related: Navy veteran saved by Chihuahua after having a stroke

The gifted pianist did not appear to pick up the instrument on his own, though.

Nyx, 29, from Philadelphia, explains to SWNS that she trained Winslow to play the mini piano to get him to stop meowing as much.

“He used to run around screaming all the time, and I was like, ‘This is no good’,” said Nyx.

A musician herself, Nyx reportedly purchased the tiny musical toy on eBay before she got Winslow. However, when he was a kitten, he began to play around with the keys.

“It became some kind of hunting reward,” said Nyx, explaining how she trained Winslow.

Now the cat plays for food – and fans.

Winslow has reportedly grown into something of a rocker as Nyx shares his new single “Bean Gotta Scream.”