Navy veteran Rudy Armstrong survived a stroke after his chihuahua Bubu ran to get help.

A North Carolina Chihuahua is credited with saving his owner’s life last week, according to a report from WCTI.

Eighty-six-year-old Navy Veteran Rudy Armstrong survived a stroke after his little dog Bubu ran to get help. Armstrong lives alone with his furry companion in a houseboat in Oriental, a town in Pamlico County, but Bubu was able to lead a nearby dockmaster back to Armstrong's home to assist the sick vet.

“I sat down in my chair, drank my coffee, and the next thing I know it was after lunch," Armstong told WCTI about his ordeal, "I couldn’t even get my hand to move and my foot wouldn’t move.”

He also explained that he had instructed Bubu to get help from a dockmaster named Kim when he couldn’t reach his phone to call emergency services. 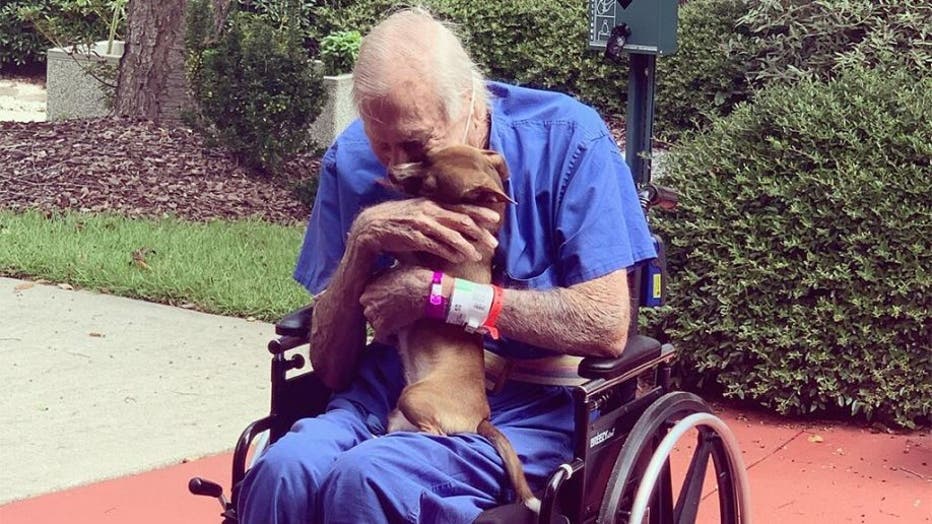 Armstrong and his pet dog Bubu got reunited five days after the Navy veteran suffered a stroke. Bubu ran and got help, which ultimately saved his life. (CarolinaEast Health System)

“I didn’t want to be there for a couple of days before somebody would come by, so I said, ‘OK Bubu, go get me some help,'” Armstrong said.

Kim called 911 after discovering Armstrong and paramedics rushed to the scene.

Armstrong was taken to the CarolinaEast Medical Center in New Bern.

On Friday, Armstrong and Bubu were reunited in the garden of the CarolinaEast Rehabilitation Hospital. Pictures of the heartfelt reunion were shared on the hospital’s Facebook page.

“Rudy, who has sailed all over the world and has stories for days, was very [appreciative] of the care he has received here, but is not a fan of our turkey sausage,” CarolinaEast’s post reads. “We thank him for his service to our country and for allowing us the privilege of caring for him and sharing his story of Bubu, the miracle pup!”

Armstrong could not be reached for comment, but a spokesperson at the rehab hospital said he is doing well and is receiving three hours of therapy a day.

Rudy and Bubu’s reunion was a special moment for the rehab staff that was able to witness it, the spokesperson said.

“He is recovering slowly but surely and looks forward to getting back to his three-bedroom floating house with his best girl, Bubu," the spokesperson told Fox News. "He says he feels much better after getting to love on her in our Rehab Garden last week.”