TAMPA, Fla. - Outside a Tampa city warehouse, strapped in a crate, is an odd place to find a statue with a long history.

"She’s got a very classical face," offered Robin Nigh, manager of arts and cultural affairs for the city of Tampa, of the 6-foot statue called 'Honor to the Mothers of the World.'

"She’s got a boy and a girl that are looking up to her," Nigh continued. "The little boy is handing her roses, and she’s also holding a baby."

The statue, carved from limestone, was created by sculptor T. Ramos Blanco in Cuba. It was given to the city of Tampa by a Cuban fraternal organization in 1948.

Old photos show its dedication ceremony near the University of Tampa. 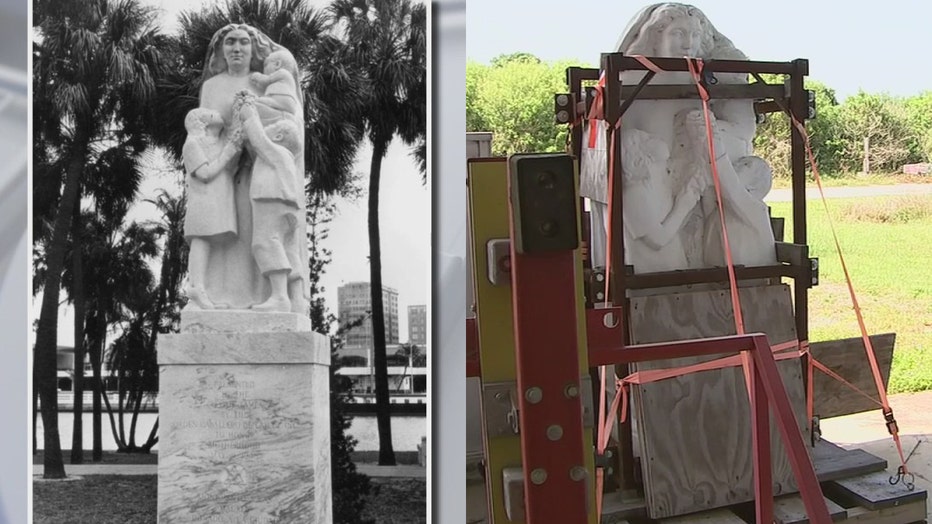 'Honor to the Mother’s of the World,' then and now

Nigh says a tradition was started: Families would come to the statue on Mother’s Day and lay flowers at her feet.

Years later when Kennedy Boulevard was widened, the statue was moved. Later photographs show the statue in Ybor City. It was then moved to the German American Club, which was sold by the city several years ago.

MORE: How Mother's Day looks different around the world

Mother’s Day around the world

Here are how some countries outside of the U.S. normally celebrate their own versions of Mother's Day:

She was crated and moved to the city warehouse in South Tampa, where she awaits a new home.

As Mother’s Day approaches, new plans are made for the old statue.

"What we will do is have her completely restored and refurbished," Nigh said.

MORE: The history of Mother's Day: A look at the woman behind the celebration

The Origins of Mother’s Day

Many have celebrated the holiday for years, but not all know of its history.

Right now, she’s guessing the cost of restoration will be around $25,000. Where the statue will be placed hasn’t been decided. Nigh says it could be on the Riverwalk on the west side of the Hillsborough River or back to Ybor City. She’s open to suggestions as long as it’s city property.

"I think it’s a wonderful tradition, and what could be wrong with appreciating your mom?"